The Star of Bethlehem

In his simple, direct, yet beautiful way, Matthew relates the narrative of the earthly advent of him whom the prophets of old had foretold, whose coming the Israelites awaited. They expected a king, a personal savior, their Messiah, and his appearance was to be ushered in with befitting material splendor. Is it any wonder that their eyes, befogged with material theories, were holden, so that they could not see the light of that "star" that guided the "wise men from the east" to Bethlehem "where the young child was"? Their honest desire for good had caused their diligent search for God, and singleness of purpose had given them a vision. Being of one Mind they could perceive and journey together in the light of that wonderful star.

The desire for good is innate in man, because good is man's inalienable right by virtue of reflection. How could it be otherwise, since God, the Father of man, is infinite good? Then to experience good, one needs to know God. Man, as God's child, God's expression, is now at the standpoint of all good. It is his divine inheritance. What, then, could separate one from this true knowing and cause him to wander in the bypath of material ways? Man, God's idea, can never be conscious of anything but true being, God. For every true idea, error claims a suppositional opposite. The counterfeit of divine knowing is human knowledge. Mrs. Eddy defines this knowledge in the Glossary of "Science and Health with Key to the Scriptures" on page 590, where she says: "Knowledge. Evidence obtained from the five corporeal senses; mortality; beliefs and opinions; human theories, doctrines, hypotheses; that which is not divine and is the origin of sin, sickness, and death; the opposite of spiritual Truth and understanding." This knowledge, the basis of all error, has led men to seek out "many inventions" which, as the wise man says, are all vanities. Human theories have ever detracted attention from the spiritual to the material, from the infinite and eternal to the finite and temporal. Through them man's natural tendency toward God, the only good, would seem to be checked by an opposite attraction, the human and material belief of good.

Send a comment to the editors
NEXT IN THIS ISSUE
Article
"Why are ye fearful?" 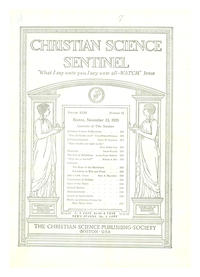