In a recent issue you publish an interview with a medical...

In a recent issue you publish an interview with a medical practitioner, according to which that gentleman would have the public believe that the healing method in Christian Science consists in merely telling a sufferer that he is not suffering. The intelligent person, confronted with the spectacle of the man he knew yesterday as sick and wasted and with no hope of restored extended to him by friend or physician, today restored to radiant health, will not be satisfied with such an explanation. The now practically undisputed fact that hundreds of thousands of cases have been healed, embracing not only all manner of sickness, nervous and functional, structural and organic, but also drunkenness and drug mania and other forms of moral delinquency, seems to demand a more scientific basis than mere verbal assertion.

No, Christian Science restores men to their rightful heritage of health and happiness in the divinely scientific way, the way the Master who came to do the will of God inculcated, the way the disciples and the apostles demonstrated, and the way practised by the Christian church in patristic days. How? By the realization of the fact that it is no part of God's will that disease should exist; that if it does seem to exist it does so, like other material manifestations, only in the human consciousness, and not by virtue of any inherent reality; and, finally, that man has the power, through him who came "that they might have life, and that they might have it more abundantly," to correct such an erring consciousness or false belief and to manifest health and harmony as the result.

Send a comment to the editors
NEXT IN THIS ISSUE
Poem
Sometimes, I ween, the Master smiled—... 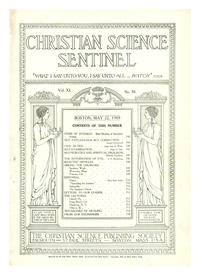