The Seed of Error

In well-nigh every community there is a story of some man who sought revenge by secretly casting evil seed into his neighbor's field. In one case it was the fluffy, floating seeds of the thistle which a man gathered and committed to the innocent breeze, so that in the subsoil ploughing and cultivating which his neighbor had to do to get rid of the troublesome weeds, about two years' use of his field was lost. In another case it was the yellow wild mustard which grew up in large patches where handfuls of the accursed seed had been liberally scattered in the night. Malice has even been successful in mingling the seed of troublesome and harmful weeds with the true seed which the very owner of the fields himself scattered upon them. All such secret acts of ill-will are vigorously condemned, and yet the sower of hurtful and distressing thoughts in a community is not condemned,—indeed, he is looked up to, if these thoughts are but presented in the name of medical science.

People go to certain sources to find out how to have health, and the theories given them they carefully cultivate, like the farmer who expected a clean crop and good increase; and like him they are surprised often when the crop appears. They sow for health, and with annoyance reap inexplicable and perplexing conditions of ill-health. They thought they had sown only the seed of strength, exuberance, vitality, but find that somehow the seeds of languor, fear, pain, and invalidism have been mingled with their sowing. 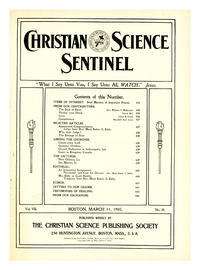