This article was later republished in&nbsp;The First Church of Christ, Scientist, and Miscellany:&nbsp;My. 266:1-9

The following from the pen of the Rev. Mary Baker G. Eddy appeared in the New York World of December 30, 1900. It was written at the request of the editors, and was one of upwards of sixty replies received from prominent thinkers of the world, both men and women, in answer to the query, What is the chief danger, social or political, that confronts the new century?

To my sense the most imminent dangers confronting the coming century are robbing people of life and liberty under warrant of the Scriptures, the rights of politics and human power, industrial slavery, insufficient freedom of honest competition, ritual, creed, and trusts in place of the Golden Rule: "Whatsoever ye would that men should do to you, do ye even so to them." 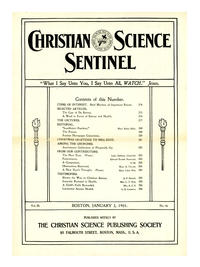