I wish to express my appreciation of the article in a recent number of the Sentinel entitled, "There is Rest and Peace on Earth." The reading of this beautiful contribution has been very restful indeed to me, and I am sure it has also brought a new sense of peace to other readers of the Sentinel. How true it is that there is "rest and peace on earth" to those who are trying to apply the teachings of our beloved Leader to their daily experience. Rest in Christianly Scientific work—peace in the consciousness of work well done.

In my business I have just had an experience which was particularly satisfying, because the problem involved almost no element of material loss or gain, to me. I was notified one morning recently that some people with whom our firm has business had failed to provide promptly a large sum of money which was due other people on a certain date. Ordinarily a delay of this nature would inconvenience and perhaps embarrass a large number of people, so when I first heard of the seeming neglect I was temporarily overcome by a great sense of disappointment, anxiety, and condemnation of the one who had apparently failed to do his duty. I, however, went at once to a part of the office where I could be alone, took "Science and Health with Key to the Scriptures," read a few sentences of the Truth contained therein, and worked against the sense of error which had been presented to me until it was completely destroyed. After sending the necessary telegrams and doing what seemed wise from a business standpoint, I went about the other duties of the day without the least anxiety, fear, worry, or resentment. Within forty-eight hours from the time the matter was presented to me, the necessary funds had been supplied and the whole affair had been adjusted harmoniously and in a manner perfectly satisfactory to all concerned. So far as I know, the incident has worked no hardship to any one. I am sure it has been a positive benefit to me. I give Christian Science credit for the happy outcome of what ordinarily would have been a very disagreeable business complication. 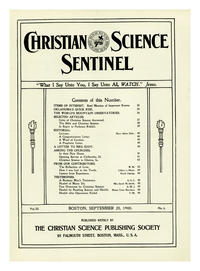