Have We Failed in Our Treatment of Him?

"I would rather be a Malay subject to Spain than an American Indian subject to the Indian Bureau," exclaimed a distinguished clergyman the other day. "Our treatment of the Indians," declares a great religious journal, "has been a miserable failure."

Easy, very easy, is such extravagance as this. The United States government does not "talk back." So it is safe for every orator of limber tongue and editor of vagrant wit to pitch into it, sure of applause from that section of the people, smaller than it once was but yet not insignificant, which delights to see its country blackguarded and its public men condemned as hopelessly inferior to those of Europe, don't you know. The Philippine situation has given a tremendous stimulus to this kind of chatter, half malicious and half ignorant. It is well, in the interests of the exact truth, therefore, to have such a powerful reply as that of ex-Senator Henry L. Dawes in his paper in the August Atlantic Monthly, "Have We Failed With the Indian?" 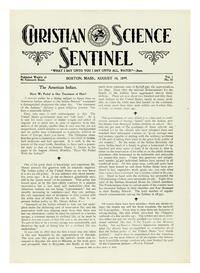