Christian Healers are not Persecutors

That those who object to the drug system of medical treatment do not persecute those who favor that system of treatment is a well known fact. They do not ask legislatures to enact special laws to protect them in their practice. They do not object to any law that is enacted or proposed to protect one believer in the drug system from any other believer or advocate of that system. In fact, they all believe (so far as I am informed) that stringent laws ought to be enacted to protect those who believe in the intelligent power and efficacy of the drugs used in that system from injuring each other by their use. Christian Scientists, and all others who object to the use of drugs in the treatment of disease, simply ask the privilege of being permitted to use their own judgment regarding what treatment they shall employ when they find they have need of help to overcome sin or sickness. They only ask that they may enjoy the same freedom in selecting a doctor to assist them to overcome physical infirmities that the state permits them to have in selecting ministers to assist them in overcoming the influences of sin, and in gaining a better understanding of God's will regarding man. Now, in the name of all that is reasonable and right, tell me, is there anything unjust or unreasonable in this demand? Understand, they do not even attempt in any way to force their system upon people—they only ask that intelligent men and women read the Bible and their text-book—for-sake idolatry and sinful ways, love God and man, and so govern their bodies that they will reflect Christ, Truth. They believe that Jesus spoke the truth when he said, "The truth shall make you free."

Regarding the benefits of the two systems they only ask that the people compare results. Christian healing never produced a drunkard or opium-eater, never poisoned a person, never caused a death by administering "the wrong" medicine, never salivated any one, in a word, never injured any one. But at this point some one may quote that stale and oft repeated saying: "Yes, but you let people die without doing anything for them." Now without prejudice let us look at this statement. First, I wish to say that it is unjust for any one even to try to make it appear that I underrate or fail to appreciate and value the physicians who practise the drug system. I believe that the drug physicians of this community are far in advance of the average physicians of most cities of the same size, and no one in this community respects them more highly as men of education, of moral worth and honesty of purpose, than the writer, and personally the most kindly feeling exists between us. Men may be educated, may be honest, may firmly believe they are doing God service, when they are persecuting Christian healers. Before Paul became a Christian himself, he thought he was doing right when he persecuted Christian healers and had them imprisoned. Remember, we are considering systems of healing the sick. If the drug system has been a success—so successful that those who practise that system can give us assurance of even half the length of life that it is evident God intended man to enjoy on earth—then there would be some excuse for them to claim as they do that they should have special laws enacted in their favor, and that all who do not believe in that system should be prosecuted if they refuse to take drugs or employ drug doctors. That the system has not been a success, after having the most favorable laws enacted to assist those who practise it, is a fact admitted to-day by many of the best practitioners of that system. That the drug system is a curse to humanity instead of a blessing, I believe with all my heart. My parents worshiped at the drug idol shrine. When but a few weeks old I was left a motherless child. The best physicians of the drug system in America ministered to her. She received the approved treatment of her day, but treatment which the same school to-day declares to be murderous. Jesus never practised this system, and never spoke favorably of it. That he spent much of his time in healing all manner of diseases, no Bible student will deny. That he did not rely on drugs to assist him is admitted by all. That he was the Great Physician, Teacher, Demonstrator, and Wayshower has been clearly proven,—that in his practice of the system he inaugurated, he never failed to effect a cure, is certain. This, then, shows the system to be per fect, and further shows that any failure on the part of those who practise this system is not the fault of the system itself. During the thousands of years since Pagan priests first inaugurated the drug system, there has been a gradual increase in the number of diseases, and in the number of (so-called) remedies used, while the number of (so-called) incurable diseases has steadily increased. Jesus spoke as never man spoke before or since, but never a word did he utter that can possibly be construed in favor of drug medication. On the other hand, he did say, in the presence of the most terrible manifestation of disease, "All things are possible to him that believeth." He manifested and taught the All Power of God. He demonstrated that divine Mind was sufficient to overcome all claims of disease. "Let this Mind be in you," is the Scriptural injunction. 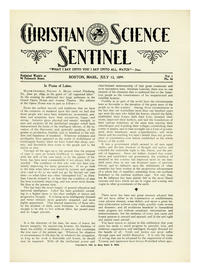