Do Not Deify Mrs. Eddy

The founders of this republic did not rebel against government, but against government in accordance with the ideas of King George III. Most people who call themselves atheists, agnostics, etc., are not in rebellion against God, but against the various conceptions of God presented to them by the different schools of theology. 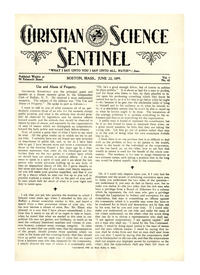