When my four children were ages two through seven, they played every day with their four friends who lived across the hall from us. The neighbor children all came down with chicken pox, and their father remarked that he was expecting that my children would soon catch it, too.

But I understood from my study of Christian Science that contagion is not inevitable. Mary Baker Eddy writes in Science and Health with Key to the Scriptures, “We weep because others weep, we yawn because they yawn, and we have smallpox because others have it; but mortal mind, not matter, contains and carries the infection” (p. 153). 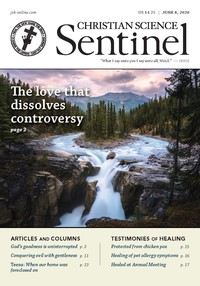