This testimony first appeared in the July 2014 Portuguese, Spanish, French, and German issues of The Herald of Christian Science. It was adapted from an El Heraldo de la Ciencia Cristiana radio program titled “Una salida para la depresión” (A way out of depression).

My father passed away six years ago, and I was very distraught. I was so disheartened that I didn’t even want to get out of bed.

As a student of Christian Science, I’ve learned that sadness doesn’t belong to God’s children, so I didn’t accept that depressed state of mind. I realized I needed to understand that although my dad wasn’t physically present, he, like all of us, is a spiritual idea of the infinite Mind, God, and an idea cannot die. 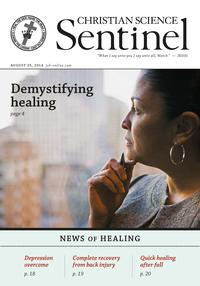