What would you say about a man who buys a parcel of land in a country on the verge of collapse? A dubious investment? Actually, no. The man is the Hebrew prophet Jeremiah, and the country is Israel, whose king (Zedekiah) is about to be carried off captive to Babylon. But because he’s confident in God’s power to save his homeland, Jeremiah not only consummates the real estate deal but also declares publicly, “Ah Lord God! behold, thou hast made the heaven and the earth by thy great power and stretched out arm, and there is nothing too hard for thee” (Jeremiah 32:17 ). These words, comprising the Golden Text for this week’s Bible Lesson, answer squarely the question posed by the subject: “Is the Universe, Including Man, Evolved by Atomic Force?”

The Responsive Reading introduces another Old Testament figure—the patriarch Job—who, despite all his woes, stays true to his faith in God’s transcendent power as the creator of heaven and earth. “By his spirit he [God] hath garnished the heavens,” Job tells his friends (Job 26:13 ). Section 1 spells out why atomic force, or matter, could never have created the universe, which is actually spiritual, not material. And, though in Section 2 Science and Health with Key to the Scriptures by Mary Baker Eddy credits Charles Darwin’s 19th-century theory of evolution by natural selection with being “more consistent than most theories,” it’s clear that “the true theory of the universe, including man, is not in material history but in spiritual development” (p. 547 , citation 8).

Christian Science practitioner and teacher Mary Trammell earned her MA and PhD in English Literature and Bible history, and coauthored The Reforming Power of the Scriptures. 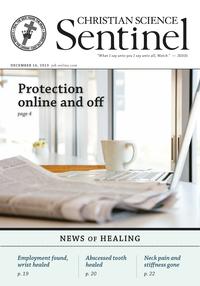