NOT DEFINED BY RACE

Being black in a multiracial nation means something different in 2005 from what it did in the civil rights turmoil of 1960s America, says Philip Green. Aggressive and subtle shades of discrimination and stereotyping persist, between and within racial groups. Yet this writer sees positive change under way — in his own maturing views on race, and in the way people in general view racial identity and skin color. Change happens, Philip Green says, "one improved thought at a time," and he believes that the agent of real change is spiritual, the spirituality that "reveals what we are, individually, as God's children."

I grew up trying to integrate myself into two cultures, the black culture of my fellow African Americans in Boston's Dorchester neighborhood, and the predominantly white or Caucasian culture that I experienced by attending a high school in Lexington, Massachusetts, a western suburb of Boston. 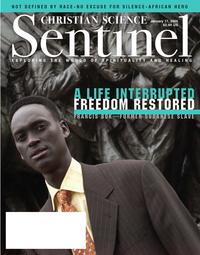