A spiritual lesson from arithmetic

As he grows up, a child learns to recognize numbers. A little later he learns to combine them; eight and four make twelve. Perhaps simultaneously he learns that twelve less four leaves eight. One day he is confronted by eight take away twelve. A bright child may say, "I can't do it. Eight isn't big enough."

About this time the teacher may explain that if the thermometer reads 8 degrees and the temperature goes down 12 degrees the thermometer will then read 4 degrees below zero, or minus 4 degrees. Or if you buy an article that costs ten dollars and you find you only have eight dollars, you will owe two dollars. In this way the child begins to grasp the concept of negative numbers.

Send a comment to the editors
NEXT IN THIS ISSUE
Article
Lose Mind? Impossible! 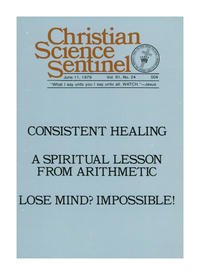