When I was seven years old, my mother sent me to the Christian Science Sunday School

When I was seven years old, my mother sent me to the Christian Science Sunday School. She was a widow and I her only child, and she felt unable to cope with her many difficulties. When I returned home from my first Sunday feeling so happy, she decided to investigate this Science for herself. We have never regretted it.

Two years after that I became seriously ill. A close relative thought it irresponsible not to call a doctor. After discussing the matter with her, my mother agreed to have me examined for the sake of reassurance, with the understanding that no medicines would be administered. The diagnosis was not comforting: tuberculosis of the spine. 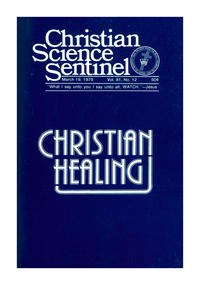