Beyond belief into divine law

Most health care systems gain a following because physical health improves, at least to some degree, when people adhere to the procedures. Without that apparent improvement, material medicine, acupuncture, hypnotism, or any other limited system would diminish. People will support what they believe helps them. More accurately stated, what people believe helps them becomes a kind of temporary support to them.

An important question needs to be asked about the long-term effect of systems of health care. When there is improvement, has genuine health replaced illness, or has a body with fewer surface symptoms replaced a body that once had more obvious symptoms? Speaking of hypnotism, for instance, Mrs. Eddy warns: "The hypnotizer employs one error to destroy another. If he heals sickness through a belief, and a belief originally caused the sickness, it is a case of the greater error overcoming the lesser. This greater error thereafter occupies the ground, leaving the case worse than before it was grasped by the stronger error." Science and Health, p. 104; 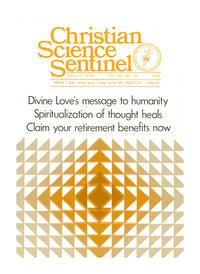