Honesty is a quality of Mind, a reflection of divine Principle; it is correct thinking and therefore correct action. Man is honest just in proportion as he reflects the invariable Principle, as he brings out in daily life the fundamental spiritual cause, the allness of goodness. To be absolutely conscious of his honesty gives a man the certainty that bears him on through all difficulties and overcomes every obstacle, for he knows himself to be the reflection of Mind, infinite good. Knowing that he has sought Truth with an honest heart gives the beginner in Christian Science strength to resist the insinuations of error which present themselves to thought: "I have not studied Christian Science long enough," or, "My understanding is too small." He has learned that the battle is really not his but the Lord's.

Mrs. Eddy writes in "Science and Health with Key to the Scriptures" on page 453, "Honesty is spiritual power." This shows clearly that assurance, peace, liberty in action and speech are connected with honesty. To acknowledge to one's self honestly in the quietude of thought the ever presence and allness of God, infinite Mind, enables one to demonstrate, step by step, man in the image and likeness of God. This admission destroys the belief in many minds or powers, as well as the belief in a bad influence of these minds on our thoughts. A lie can never resist honesty, as there is no truth, no substance in it, and time always will prove its fallibility. Thousands of lies may be put before the world, be it in form of wrong reports, misinformation, or through personal influence and misrepresentation of facts, but all that cannot for any length of time affect or deceive the honest seeker of Truth. Before the clear and honest understanding of God as all-knowing Mind, who speaks always to man through spiritual discernment, as He did to the prophets thousands of years ago, the lie must disappear, and it is immaterial whether there be but one lie or legions. Yet in order to be truly honest a man must surrender his own will, give up preconceived opinions and let that Mind be in him "which was also in Christ Jesus." Then God's way will be shown, be it through a clearer discernment or through correct information. Paul was honest when he persecuted at first the early Christians; he believed himself to be absolutely serving the right; but he humbly accepted the truth when he received a clearer vision. This honesty enabled him to change his standpoint suddenly and he became a friend to those whom he had previously persecuted. He did not ask himself, "What will people say;" he stood firmly for the right, now revealed to him by the Christ on his way to Damascus. 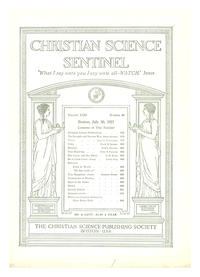