"What is the matter?"

A Phrase frequently used by the average man when some seeming discord comes within the range of his physical senses, is the question, "What is the matter?" What, of course, the finite human mind means to ask is, "What is the trouble?" or rather, "What is the nature of the discord so evident to my sense of sight?" In using the above phrase the average man associates his troubles with matter, and he is right in so doing, even though perhaps unthinkingly; for it is impossible to imagine any form of evil, whether of sin, sickness, or death, without linking it with matter. Poverty is a belief in a lack of matter; sin a belief of pleasure in matter; sickness a belief of pain in matter; and death is, in one sense, a belief in the disintegration of matter. Humanity could with much profit to itself, and should out of duty to God and man, look beyond the frail evidences of the personal senses and discern the true nature of its enemy, the belief in the reality of matter with its attendant discords. It would then be seen that matter is only a belief.

Absolutely, the only evidence a mortal has of matter is through the avenues of the material senses, which are supposed to be material organizations. The unsubstantial nature of not only the evidence of the physical senses but also the possibility of their presenting such, may be shown by several lines of reasoning, of which the following is one. Take the sense of sight, which, perhaps more than any other, with the possible exception of the sense of touch or feeling, supposedly presents the evidence which makes material objects and discord seem so real. According to the latest theories, the light passing through the lenses of the eye forms on the retina an image of the specific object seen. The optic nerve, through excitation or some other unexplained process, is said to transmit the image-message to the brain, the so-called seat of human consciousness. Then from this assumed information there is formed in the human mind that which is commonly called an impression, which is merely a concept of the object in question, whether it be a molehill or a mountain. It is extremely difficult, however, to see how a nerve, a thread of flesh, possessing no more intelligence than a linen thread and acting in the supposed capacity of a messenger boy, can transmit a message to an equally nonintelligent brain. Certainly, if a linen thread or a nerve were attached to a piece of paper or any material organization of matter, arranged in any manner whatsoever at the base of a telescope so that an image were thrown upon it, neither the thread nor the nerve could transmit the image to the brain of a mortal. Indeed, the only reasonable view to take is that the material object, eye, nerve, and brain exist solely in human thought, of which the material senses are the instruments and products. Thus matter is seen to be no more than a mental picture or an image of human thought. 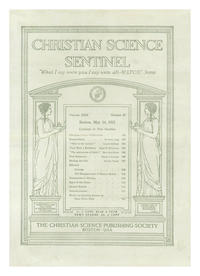