The Nothingness of Nothing

WHEN Mrs. Eddy realized the nothingness of evil, she found the way to its destruction. For centuries the world had been fighting evil, or rather the instinct of good in the world had been fighting evil, as a tremendous reality. The human being, animated by some dim realization of Principle, went into the battle with evil, not regarding his true self as the image and likeness of Principle and so as its master, but regarding it rather as described in the old folk tales, and himself as a frail and sensuous man, engaged in a more or less unequal contest with it. He forgot that if the writer of Revelation pictured this evil as a great red dragon for the purpose of symbolizing its pretended might, he later endowed it with the other names for evil, "that old serpent, called the Devil, and Satan," with the intention of insisting upon the oneness of its claims to counterfeit reality, before consigning them to oblivion and nothingness. Thus when Mrs. Eddy, in Science and Health, first drew attention to the obvious fact that if God, Principle, was good and was infinite, there was no room for evil as a reality, scholasticism roused itself into a veritable passion of argument, in the course of which it rejected every one of its own axioms, and behaved more like the demoniac amidst the tombs than anything else.

Now it must not be imagined for one moment that the repudiation of evil as a reality even predicates any encouragement to sin. It does the very reverse. It makes sin deliberate, beyond the advancement of any excuse, and so exposes the impossibility of sin unrepented of escaping punishment. The Calvinist or the fatalist may plead the inevitability of sin, when sin is foreordained, but the Christian Scientist knows that sin is a mesmerism which must, sooner or later, be awakened from, since good, because it is Principle, must also be the reality. Nothing, that is to say, outside of Principle can have any actuality. As a theory such a statement is easy enough to comprehend. But Christian Science is not satisfied with theories. James declared that faith without works, theory without demonstration, was a dead thing. Mrs. Eddy has gone as far, or further than James. "In Science," she writes, on page 329 of Science and Health, "we can use only what we understand. We must prove our faith by demonstration." In this way the emotionality of religion is put out of court. Religion is proclaimed as precisely what it is defined as in the Greek of the New Testament, the scientific knowledge of God, Principle. And the student is forced to take his stand on those wonderful opening sentences of the First Epistle of John, read no longer as a mystical utterance, but as a plain scientific statement: "That which was from the beginning, which we have heard, which we have seen with our eyes, which we have looked upon, and our hands have handled, of the Word of life; (for the life was manifested, and we have seen it, and bear witness, and shew unto you that eternal life, which was with the Father, and was manifested unto us;) that which we have seen and heard declare we unto you." 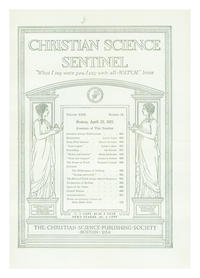