The Destruction of Sin

Recently the workhouse in one of the largest cities of the United States was closed. Within a short distance of the workhouse referred to—almost in sight of it—there was established last year a new Christian Science church. The people attending it have increased in numbers until they are now filling the meeting place and a new church edifice is to be built. Sin filled the one building that is now empty; divine Love has filled the other that is overflowing. Is not this a beautiful realization of Truth displacing error?

At a Wednesday evening meeting, in the church referred to, a testimony was given of the healing of sin through the knowledge of divine Love learned in a Christian Science Sunday school. One little boy told another one that it was not loving to beat a dog as he was doing and that he ought to go to a Christian Science Sunday school to learn about Love. An intoxicated man overheard the conversation. His sin was uncovered. He went to his home thinking of the way he had beaten his wife and children when under the influence of liquor. He told his wife of the remark he had overheard, and said that he would never again return home in the condition in which he had appeared i the past. He and his family went to a Christian Science church and are now ardent workers in the cause. That is another beautiful case of Love displacing sin. 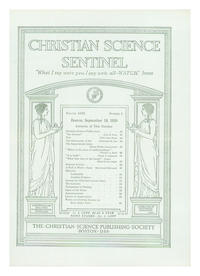