One must be receptive to the truth before one can stop believing that which is not true. The only thing that can be changed is the mortal thought, for truth is unchangeable; yet that is what mortal mind does not want to do, for it clings to what it thinks to be true; and even when it is rebuked with the facts, it still holds to its delusions. How often when there seems to be a case of sickness the material senses argue for the belief of sensation in matter; yet that does not change the fact that matter has no sensation. One can only be deceived so long as one is willing to believe a lie. What the material senses are declaring does not change the fact that man is spiritual and that there is no reality to matter.

The arguments of the material senses are never real. Jesus said of Satan or mortal mind: "He was a murderer from the beginning, and abode not in the truth, because there is no truth in him. When he speaketh a lie, he speaketh of his own: for he is a liar, and the father of it." It is our right to refuse to listen to these deceitful witnesses and rise to the clear perception of what the truth is, instead of giving credence to these unreliable arguments. One must take a firm hold on the truth and clearly comprehend the real condition. There is always the truth about everything, and that is what one must realize. To understand the absolute is to have ears attuned to the higher voice of Truth and be lifted to the spiritual heights that John reached in the visions of the book of Revelation. 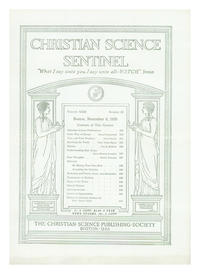