For a long time I have felt I should give my testimony...

For a long time I have felt I should give my testimony through the Sentinel, that it might help some one who is suffering and in mental darkness. Almost two years and a half ago I became discouraged over the different religious beliefs in which I had failed to find any spiritual benefit. I was hungering and thirsting for spiritual food, for "the kingdom of God, and his righteousness." A friend of mine and I had talked about Christian Science, as she needed spiritual help as well as myself, so we determined to procure the book, "Science and Health with Key to the Scriptures" by Mary Baker Eddy. I soon found we could not all of us read in the one book, as there were three or four in her family who desired to read it, so I decided to get a book of my own. I started to read, and the more I read the more I wanted to; I could not find a stopping place. In about three weeks a wonderful change had taken place. First I felt as if I had not a friend left. I felt as if I were lost in a wilderness, in total darkness, but all at once it seemed as though a great and heavy cloud was lifted, and the truth that "the kingdom of God is within" was revealed to me. All I could say was, "God is Love and God is my Life, and there is none else beside Him." I was not seeking for physical healing, but I was healed of rheumatism in my ankles, also of torpid liver, constipation, and stomach trouble. My hair had been falling out till the front of my head looked bare. Now I have nicer and longer hair than before. This has all come about through the reading of Science and Health.

The following winter, when the walks were covered with ice, I stepped out of the back door and my feet slipped. I fell on my right knee on an upturned corner of cement sidewalk and was severely hurt. I could not get up for a few minutes, the pain was so intense. Then the thought came to me, "Now is your time; prove your progress by demonstration." Just as soon as I had declared the truth and walked about ten or fifteen feet all pain had left, and I walked three blocks and a half to the post office, and home again. I was healed. I am so thankful to God, but words are inadequate to express gratitude. I want so to live that I may prove myself a child of God, and follow in the footsteps of Christ Jesus, the Way-shower.

Send a comment to the editors
NEXT IN THIS ISSUE
Testimony of Healing
I wish to join the most grateful of people in testifying... 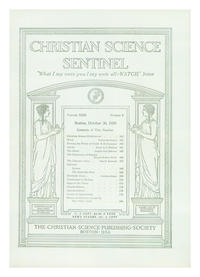