A despatch states that a Japanese professor claims that...

A despatch states that a Japanese professor claims that the key-note of Mrs. Eddy's religion was transplanted from Japan and was practised there four hundred years ago. He might have gone back two thousand years and discovered that the things Mrs. Eddy teaches were the doctrines preached by Jesus Christ and taught by him. In his last words to his disciples, just before he ascended, he said of all those who believed in him, These signs shall follow them that believe; In my name shall they cast out devils; they shall speak with new tongues; ... they shall lay hands on the sick, and they shall recover." Mrs. Eddy's doctrine, therefore, is not a new doctrine. It was not only practised by the disciples of Christ, but was practised for four hundred years after his time.

Send a comment to the editors
NEXT IN THIS ISSUE
Article
Our clerical critic errs when he classes Christian Science... 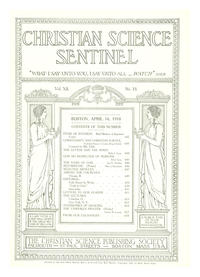