There is an army now engaged in "the good fight" for Truth, and it is largely made up of heroes and heriones. The writer has come to know many of them during the last twelve months, and he believes that honor ought to be accorded where honor is due, that deserved words of recognition and encouragement are wise because deserved. Scattered throughout the world are heroic men and women who are braving ridicule and misrepresentation,—persecution of varied forms,—supported only by their gratitude for Christian Science and their consciousness that they are serving God and humanity. Around them are many others who owe quite as large a debt of gratitude to Christian Science, but who lack the courage and fortitude to enroll themselves openly under its banners. If all who are thus indebted were under our banners, our numbers in many communities—probably in nearly all communities where Christian Science has had an opportunity to do its works—would be greatly increased.

In our larger cities the time has not passed when it requires moral heroism openly to avow oneself a Christian Scientist, and in our smaller cities and towns the time has not begun to pass. In these latter communities the strident voice of Mrs. Grundy has always been too notable an authority, and the fear of her criticisms, where every person comes under the surveillance of the entire community, is often a very unpleasant test of one's courage. Christian Scientists in the larger cities have their own difficult problems to solve; but they sometimes fail to appreciate the difficult environment of their brothers and sisters in those smaller communities where everybody is known to everybody. There is no harsher critic than he, or, still oftener, she, of a small city or town. In the large cities there is far more personal independence in both opinion and conduct. In our towns and smaller cities, the genius of progress is constantly confronting "time-honored" customs, opinions, beliefs; and the man or woman who fails to bow deferentially to these "time-honored" survivals needs to study the story of Gulliver when he was found asleep by the Lilliputians on his first introduction to their country, and bound to the earth as a prisoner in their absurd but unpleasantly effectual bonds. The truly granitic nature of rural conservatism is scarcely appreciated in our progressive cities. 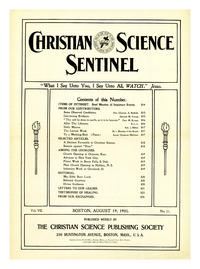