The Omnipotence of God

The word "omnipotence" is not infrequently used in a manner which is so careless as to frustrate the legitimate conclusions that should be drawn from its true meaning. It is sometimes used as equivalent to superior power or supreme power, while it really means almightiness, and its true significance will not admit of any lesser interpretation. Its derivation makes it clear that the word omnipotence means "all-power" or all-mightiness; not merely a power superior to other powers, or even a power supreme over all other powers, but the only real power, the possibility of the existence of any other real powers being excluded. There cannot be more than "all," hence there cannot be another real power beside omnipotence. It is thus, as the one and only power, that Christian Scientists are taught to regard and know God.

The admission that there is any other power beside that of God, leads, as our text-book shows, to errors variously called mythology, idolatry, or materialism, and to the worship of all manner of other gods, in disobedience to the first commandment. 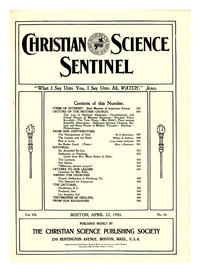