The Value of Good Expression

There is an art in clear expression which equips with convincing power. It consists in presenting a given thought so clearly that it reaches the understanding of another and thus impels him to action. This art not only wins success in convincing others, but it tends to clearness of thought and keenness of perception, and thus makes reading more profitable. To be content with an imperfect command of expression is to miss much in both growth and service. The best way to acquire this command of language is to study and practise the rules of composition, and acquaint oneself with good literature. A simple style is conceded to be the most effective. It consists in going straight to the point, and by the use of plain words which are readily understood by every one. The clearness with which a truth is stated largely determines its success in displacing error, and the mastery of good expression thus becomes a most important part of our equipment for effective spiritual warfare.

Send a comment to the editors
NEXT IN THIS ISSUE
Poem
"What think ye?" 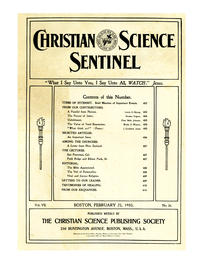