The second number of the Commoner, Mr. Bryan's new paper, was issued January 29. It already has a large circulation. The most interesting feature of the second number is an editorial commenting on Ex-President Cleveland's recent proposition to increase the President's term to six years and limit him to one term. Upon this he says: "To lengthen the President's term is simply to enlarge the stake for which great interests play. Trusts could increase their campaign fund fifty per cent if they could secure the control of an administration for six years instead of four. A four-year term is long enough for a good President and too long for a bad one."

The army reorganization bill, which was finally passed and signed by the President on February 2, will be immediately carried into effect. It raises the permanent strength of the army to about one hundred thousand men, which will consist of fifteen regiments of cavalry, a corps of artillery, and thirty regiments of infantry. The army will be officered by a lieutenant-general, six major-generals, fifteen brigadier-generals, and the usual regimental and company officers. 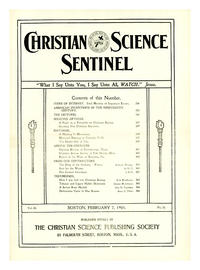