with contributions from Samuel Longfellow

The Toronto (Can.) Globe gives the following synopsis of a sermon recently delivered by the Rev. J. P. Gerrie, pastor of the Zion Congregational Church in that city.

The twentieth-century church will be one of liberty. The membership will not enter into conflicts and divisions over questions of immersion and sprinkling, higher or lower criticism, evolution, eternal punishment, Biblical inspiration, or no. The honest, loyal disciples of the great Master will not quarrel and divide over mere doctrines, but will give to one another the fullest liberty of the Gospel of Jesus Christ. All caviling about comparatively unimportant theological differences will cease. There will be room for all. It will be a democratic church. The tendency of the age is toward democracy, and there are few nations in the world not manifesting movements in this direction. It is so in the church. Churches and congregations which heretofore revealed a concentrated authority resting in the hands of one or a few, to-day show the rule of the membership. There are few congregations where any ecclesiastical official can assume the role of the dictator. In political affairs our own Canada has shown the emphatic refusal of the people to be controlled by a hierarchy. It needs no special prophetic insight to see that the twentieth-century church will be a democratic one, a fact which calls from its membership the highest intelligence and the deepest spirituality.

Send a comment to the editors
NEXT IN THIS ISSUE
Article
Reply to Mr. Stokes 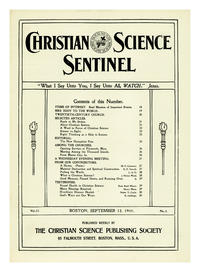