Christian Science in the Home

I have been impelled for some time to write and express my appreciation of the many helpful thoughts which come to me each week, through the columns of the Sentinel. Each paper is as good as a treatment, and they have encouraged me to go on with my work many times when the way seemed dark. The same is true of all the literature of The Publishing Society. We as a family have been trusting to Science for nearly eleven years. My three children, eldest over ten, have never had one drop of medicine, and all are healthy. They have been carried successfully through all the so-called children's diseases, never lasting over three days and often overcome immediately. Sometimes when one of the children was suffering from a contagious disease I have been able to realize there was no contagion and the other children were not touched by it. These were "home" demonstrations. A case of catarrh which the eldest had manifested always, seemed very obnoxious to me. It appeared to be hereditary and was everpresent, winter and summer. I denied it so much that it became almost a reality. About that time I had an uplifting of my thought and forgot all about it, when one day the child, then about six years old, said, "Mamma, I haven't the catarrh any more." I was very thankful to Truth for this healing, and it has been permanent.

The fear of the children taking cold seemed to yield slowly. Early last spring I wrote for treatment for my fear, and they have been almost entirely free since. All this means a great deal to me, and I could write pages. Christian Science has healed me of sick headaches, which I had had from childhood, also neuralgia, just by studying Science and Health and changing my basis of thinking from a material to a spiritual standpoint. 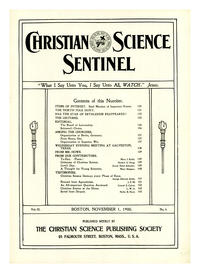