From What Cheer, Iowa.

with contributions from J. R. Lowell

Christian Science is growing so rapidly that a great many ministers deem it to be essential for the good and welfare of their "flocks," that they take a "smash" at the new doctrine with the intention of annihilating it, or at least crippling it, so that the Science of Christ cannot pursue the even tenor of its way. There is not a more quiet, law-abiding, unassuming, and unobtrusive faith in existence than Christian Science. It is noticeable, also, that those who believe in the doctrine are a very intelligent, well-to-do, wholesome class of people. Once a man believes that that which is, is right, and that God Almighty is his friend and on his side in the battle of life, he has a wonderful start toward retrieving a wasted life or fortunes wrecked by poor judgment. He ceases to wear out his nervous energy in worry, accepts conditions as they are, and goes to work to make the best of them. We do not understand the new doctrine and have no words of censure or recommendation. It seems queer to us whenever we think of it, that the real article of Christianity should have been hidden so long, but then we know that it is doing good and has done good in the world, and is it not reasonable that any movement accomplishing good in this wicked old world of ours, is worthy of respect? If the orthodox ministry would devote as much of its time and talent to a battle against Satan as it does to picking flaws in some other fellow's creed, the poor old spike-tailed devil would not have so much as a tax-title to any man's soul nowadays. "The ways they are many, the end is but one," and there is no time to be wasted among religious denominations in quarreling about the correct road to the gate of paradise. Let everybody start for the gate and get as many as possible to go along. A unanmious movement will leave mighty few people to "shoot chutes." 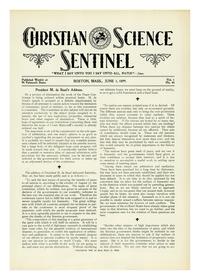