At this time golden opportunities for doing good are being offered to Christian Scientists as never before. They belong to the time, and to this stage of the movement; and if ungrasped and unutilized may not return. In the end, all shall know the Truth, but they who labor for that end are blessed in their work. "They that be wise shall shine as the brightness of the firmament; and they that turn many to righteousness as the stars for ever and ever."

The opportunity we wish to refer to is in connection with the distribution of authorized Christian Science literature. If any worker who examines the copyright insignia upon our periodicals would think for a moment what it implies—that the Discoverer of the Science of Christianity stands sponsor for these weekly, monthly, and quarterly publications, and is guarding them, with watchful look, from errors within and assaults without, this worker would be thrilled with a sense of the possibilities of blessing others by circulating these publications. When knowledge reaches its full circle among men, such agencies may not be needed; but now they are given us because of the human need for them. The Publishing Society has offered to send periodicals to public libraries where there are reading rooms, if assured that they will be willingly received and made accessible to the people. Such distribution as this can be guarded and controlled, but it would be impossible to know about the efficiency and results of promiscuous distribution, if from the Publishing House periodicals were sent to the refuges, asylums, old people's homes, literary societies, club libraries, and other institutions to which Scientists ask that they be freely sent. Manifestly the opportunity here belongs to the local workers who can watch results, and if the effort costs the price of the subscription, that sacrifice will flavor the kindness and deepen its effect upon the recipients. Those who ask the Publishing Society to do impossible things must remember that all the members of the Mother Church share in its work and rewards; and that there must be support given, and a margin of profit gained in order that beneficence may be possible. Asking others to do one's own work is like dropping buttons into the contribution box and thinking that the noise will be considered benevolence. 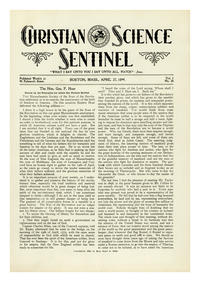