Revolutions seem to be a dime a dozen these days. But the uprising launched this week at the TEDMED medical conference in Washington, DC, just might be the most far-reaching of them all, impacting in some way, shape, or form the vast majority of those living on planet Earth. . . .

From a program that included powerhouse speakers like Thomas Frieden of the Centers for Disease Control and Prevention and Francis Collins from the National Institutes of Health—not to mention sports greats Gabby Reece, Laird Hamilton, and Billie Jean King—it’s likely that the lesser-known performance poets Sekou Andrews and Steve Connell will be the ones most responsible for setting this insurgency in motion.

Andrews and Connell began their TEDMED presentation by asking the audience, “Where do revolutionaries come from?” Drawing on examples as diverse as Jonas Salk, Martin Luther King, Jr., and César Chavez, they emphasized the fact that revolutionaries aren’t some specially trained group of people, but simply those who are willing to stand their ground.

In other words, people just like you and me.

The hope is that at least a few of the 1,300 plus attendees—a “curated audience” representing 300 medical and nonmedical disciplines—will take this message to heart and feel empowered to release the revolutionary within. While it’s hard to tell exactly which arenas of medicine are most ripe for revolt, we do know where significant uprisings are already in full swing. . . .

Stanford University’s Dr. John Ioannidis began stirring things up when he started to question the credibility of many widely accepted medical studies. What he found is that as much as 90 percent of the published information relied on by doctors is flawed. Although there is some concern in the medical field about broadcasting these findings to a public prone to overreaction, Dr. Ioannidis is adamant. “If we don’t tell the public about these problems, then we’re no better than nonscientists who falsely claim they can heal.” . . .

But perhaps the most interesting—and promising —rebellion of all is the slow but certain shift away from looking at the body as a purely matter-based construct to a more enlightened view that takes into consideration the individual’s spirituality as well.

In comments made recently to a group of health professionals in Cleveland, Dr. Harold Koenig, Director of the Center for Spirituality, Theology, and Health, spoke about the resurgent interest in the connection between spirituality and health. He noted that of the more than 2,000 studies conducted over the last ten years in this area, the clear majority point to a positive relationship between the spiritually uplifted mind and body. Some say the research may be new, but the practice of spiritual health care goes back millennia and is chronicled throughout the Bible.

While most of the modern studies address the palliative influence of spirituality, there are a growing number of people who have experienced its curative aspects firsthand, making them each a kind of health-care revolutionary in their own right. . . . 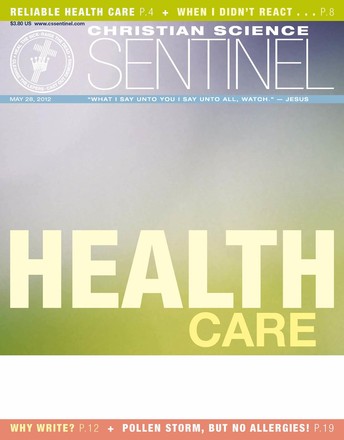