God’s protection in a flash flood

Mary Baker Eddy writes: “Good thoughts are an impervious armor; clad therewith you are completely shielded from the attacks of error of every sort. And not only yourselves are safe, but all whom your thoughts rest upon are thereby benefited” (The First Church of Christ, Scientist, and Miscellany, p. 210). I am very grateful that spiritual intuitions, or God’s angel messages, are an always-present and practical help, and that they are with us wherever we go.

During the past year I had been wanting to attempt to summit Mount Shasta, the tallest mountain in Northern California. At the end of July, I had a couple of free days, and it seemed like the ideal time. I called a park ranger, who told me that the weather looked good for the days ahead and recommended the route I should take.

Late the next afternoon I drove for over three hours before turning off on top of a well-maintained dirt road that would take me the final five miles up to the trailhead. I planned to spend the night in my car before attempting to hike up to the summit early the next morning.

Just a couple of minutes after turning onto the dirt road, I noticed a small stream of water coming down the road. This small stream quickly turned into a rushing mass which began rapidly flowing with great force on both sides of my car. I stopped the car and glanced at my phone. I had received a weather alert that stated that three to four inches of rain had fallen on the mountain that afternoon and that a few creeks were overflowing, with resulting flash floods reported across the area. The road I was on was right between these two creeks.

I started to panic and thought about leaving the car and finding higher ground. Then the thought came, “Be still, and know that I am God” (Psalms 46:10). I realized that I shouldn’t act out of panic or fear and that I really needed to listen immediately and intently to God for spiritual guidance so that I would know what to do.

The thought came to get out of the car quickly and run to see if there was a high spot in the road. About 50 yards behind my car, I found a more elevated spot. I ran back to my car, swiftly put it in reverse, and shot straight back to this slightly elevated section. The water was still gushing, but I was in a better position because of the slightly higher location.

I really needed to listen immediately and intently to God for spiritual guidance.

I sat there trying to decide whether to stay or abandon my car. In prayer, I really tried to listen to hear how God, divine Mind, was guiding my thought so that I would know what to do, instead of following fear-based reasoning. It took a few moments, but slowly, the fear started to dissipate and I was able to hear God’s message of love assuring me that I was and would be safe. I felt sure that I did not need to go anywhere but to stay right where I was and wait, and that’s what I did.

Large amounts of water continued to rush by on both sides of my car; however, the assurance of God’s presence that I was feeling in prayer actually seemed to drown out any concern about the gushing water. After praying for about 45 minutes, and seeing that the water level was not rising any more, it felt OK to try to sleep so that I’d be ready for my hike in the morning.

I awoke around 2:00 a.m. to see that the flash flood was now a small trickle of water, and had all but stopped. I was inspired to go forward and planned to hike at least partway up Mount Shasta. Because I’d had to stop several miles below the trailhead, I knew that a peak attempt was not likely due to the added distance. I proceeded to drive down the road several hundred yards, and then left the car there.

Walking up the dirt road, I saw hundreds of four- to five-foot-deep ditches, massive potholes, big boulders, and even several trees strewn across the road. I had been completely protected by staying where I’d been, and I thanked God for this protection. I felt the power of the Psalmist’s statement, “For he shall give his angels charge over thee, to keep thee in all thy ways” (Psalms 91:11).

I hiked up Shasta to around 11,000 feet and was rewarded with some beautiful views. I also was able to help some hikers who had no cell service and no way of getting down in their vehicles because of the drastic change in the road conditions. Running down the trail in an attempt to find some park rangers, I flagged down a forest service truck and told the workers about the needs of the hikers. They agreed to head up to help them.

As I started the three-hour drive back home, I realized how God’s ever-presence had been a powerful protection for everyone on the mountain. God is Mind, and when we listen to the ideas that Mind is sending to us, we are able to act quickly and with confidence, even in the face of apparent danger. 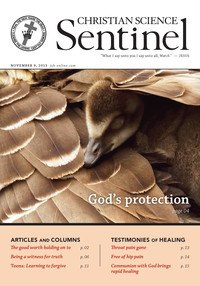