A few years ago, I saw two juvenile Purple Martins fledge from the Martin house at the end of our boat dock. One of them took off in the morning, with one parent flying alongside until it flew confidently on its own. The other fledgling stayed on its perch for several more hours before it was ready to fly. The second parent waited with it, then took off with it, through a driving rain.

This scene made me think of God’s tender parenting. Christ Jesus clearly understood God to be his—and our—Father. I have always loved that idea because it indicates God’s tenderness, which He expresses to man—to each one of us—His spiritual offspring.

Christian Science teaches that God, the source of all creation, is infinite, ever-present Mind, and that man is His idea or expression. And the Bible says, “Ye are my witnesses, saith the Lord, that I am God” (Isaiah 43:12). To me, this means we bear witness to God by expressing the qualities of His being, such as intelligence, grace, and strength. We innately derive these qualities directly from our divine Parent, God. And God and His expression, man, can’t be split apart, with man left to drift off on his own.

This tender thought was most helpful when we were raising our family. For example, when our son was about eight years old, he would ride his bike up a large hill in our new neighborhood and disappear from sight. But immediately following any thoughts of “Uh-oh,” I would stop and remember that because of that connection with God as his Father, our son had all the intelligence, obedience, and good sense to be safe, and could never stray from God’s presence. Then I’d see our son whiz back down the hill, perfectly safe and having fun. A few years later, when our daughter learned to drive, she would sometimes be out late at night with her friends. That same spiritual fact about her divine Father’s tender ever-presence and her receptivity to His guidance freed me from worry.

I’ve found the understanding of God’s parenting helpful in praying about family relationships as well. Earlier in my life, as I was growing into adulthood, it became hard for my mother and me to connect. When I married and had a young family, situations arose where we did not agree. My parents lived in another state, and their visits to our home were often tense. Once, when my parents had been visiting for about a week, an argument erupted, and they left to return to the nearby hotel where they were staying.

God and man can’t be split apart, with man left to drift off on his own.

I found myself thinking earnestly, “If I could just have some peace!” I went to a room upstairs and closed the door. Soon, Jesus’ words “Blessed are the peacemakers: for they shall be called the children of God” (Matthew 5:9) came gently to my thought. I had always thought of that verse as referring “horizontally” to neighbors or to people of other countries or cultures. But in that moment of need, as I reached out to God, I suddenly saw that it could also apply “vertically” from generation to generation—in this case, between my mother and me, and even my children and me. In reality, we are all peacemakers and children of God. With this new realization, I felt a tremendous sense of relief.

The next morning, my parents returned for breakfast without any sign of the discord from the previous night. And later, for the first time in several years, they went home happy.

This was not the end of difficult moments, but our relationship steadily improved, and I always remembered that flash of insight about being a peacemaker. Some years later, when my mother was in a nursing home, I realized that she was expressing so much more gratitude toward me, and I was expressing more grace toward her. We had a harmonious relationship before she passed on.

One morning more recently, I was studying an article in the Sentinel that reminded me of the days when my children were growing up. I thought, “Why, that same Father-Mother God who was—and is—caring for them is also my Father-Mother God, who comforts, supports, and guides me right now and whenever I am faced with challenges! Oh, joy!”

This is true for everyone. So even if we have no close family, or the family we are in is unable to support us during tough times, our divine Parent is always with us. In a poem titled “ ‘Feed My Sheep,’ ” Mary Baker Eddy, the Discoverer and Founder of Christian Science, writes of God tenderly leading all of His children. Part of it reads:

Strangers on a barren shore,
Lab’ring long and lone,
We would enter by the door,
And Thou know’st Thine own.
(Poems, p. 14)

If we are feeling abandoned or ignored, we can take heart in knowing that God hasn’t gone anywhere. He is still the tender Father-Mother God of whom the book of Isaiah says, “As one whom his mother comforteth, so will I comfort you” (66:13). As we learn to see ourselves and others as children of the one divine Parent, God, we see that we are truly all one family, and that each of us is an individual and complete representation of God, tenderly cared for under His mighty wing. 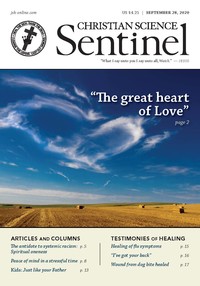