‘Refugee is not a profession’

For a number of weeks this message was displayed on big posters hanging in many places here in Berlin. I think it was meant to draw people’s attention to the fact that becoming a refugee is not something people choose, or look forward to; it is usually the unhappy result of having fled unbearable circumstances such as war, corrupt governments, or religious persecution. Very often refugees fear for their lives and those of family members, and have been forced to leave behind all their belongings, their homes and friends, their places of work, and their native countries.

The last few years we have been hearing heartbreaking accounts of what people have had to do to escape such conditions and find safety and stability. For instance, thousands have endured harsh weather conditions and constant privation crossing the Mediterranean in small, inadequate boats in search of a new home.

Whenever I hear these stories, I yearn for a sense of peace and for a solution to this ongoing humanitarian crisis across the globe. And I am reminded of these words from the Christian Science Hymnal, which bring me great comfort:

The storm may roar without me,
My heart may low be laid;
But God is round about me,
And can I be dismayed?
(Anna L. Waring, No. 148)

Indeed, there is no situation that is beyond God’s help or reach, for God, Spirit, is ever present and always available to answer our call. The book of Psalms tells us: “God is our refuge and strength, a very present help in trouble. Therefore will not we fear, though the earth be removed, and though the mountains be carried into the midst of the sea; though the waters thereof roar and be troubled, though the mountains shake with the swelling thereof.… The Lord of hosts is with us” (46:1–3, 7).

Through the ages, countless people have called on God in prayer and found Him to be “a very present help in trouble”—our family included.

We became refugees in our own country in March 1945, during the last days of World War II. My mother had been a Christian Scientist for about 15 years, although we children did not know the words Christian Science at the time. We hadn’t even heard her speak the words, as it would have been dangerous for anyone to even mention Christian Science in Nazi Germany. But this couldn’t stop my mother from praying, or prevent us from feeling the effects of her prayers and her trust in God’s protecting power, particularly during the bombing of our city, Stettin (now Szczecin, Poland), and our house.

Today I am holding to the truth that our brothers and sisters everywhere are safe in the eternal and ever-present arms of divine Love.

Families with children were strongly encouraged to leave the city for their own safety. Our father, who was a teacher at an institute for blind people in our city (one of many boarding schools for the blind located throughout Germany), was evacuated north with his students to an island in the Baltic Sea; my mother, my two siblings, and I were sent to a small village on the mainland by the Baltic. As the fighting drew nearer, my mother had the intuition that we should leave right away and go west. We left at night, when the full moon had come out to light our way. We had to walk all night and be very quiet because the Soviet forces had landed on the nearby beach. My older brother kept repeating the Lord’s Prayer. My little sister, who was only five years old, complained several times that she couldn’t walk any more, and my mother told her she must tell her feet to keep walking. There was no other choice.

At dawn, having crossed the front line of fighting, we reached a small harbor where we hoped to be picked up by the last boat that was to pass through. I am sure that my mother was praying every step of our journey, and I know it was because of her faithfulness to God and unwavering trust in Him that we continued to be protected and guided, then and in the months that followed.

Finally, a small boat came. Although it was already filled with women and many children, we were able to get on board. The weather that day was extremely stormy and the waves very high. Sea mines had already sunk two large ships, and there was much fear. I remember at one point my mother standing on the deck of the boat singing,

And o’er earth’s troubled, angry sea
I see Christ walk,
And come to me, and tenderly,
Divinely talk.
(Mary Baker Eddy, Hymnal, No. 253)

As I was just a child, the thought of Christ walking on the stormy sea impressed me very much. I looked at my mother and then back toward the Baltic Sea, where she was looking, and I wondered where she was seeing Christ. And I realized that she was seeing something I couldn’t see.

Only much later, when I was able to attend a Christian Science Sunday School, did I learn that the words my mother had sung were from a beautiful poem by Mary Baker Eddy (the Discoverer of Christian Science) that had been put to music in the Christian Science Hymnal. I realized then that what my mother “saw” was the impersonal savior or “Christ,” the eternal Truth, the healing and saving power of God that comes to every receptive heart, as Christ Jesus’ healing ministry demonstrated.

I always love singing that hymn. How very fitting that it should be called “Christ My Refuge,” as refuge is what our family was seeking and finding.

Our boat made its way safely through the stormy sea and anchored in the harbor of Ueckermünde, Germany. There, we and many other refugees were put onto a westbound train to Hanover. Although this was normally a four- to five-hour trip, it took us fourteen days. After another adventure, we finally arrived at my mother’s sister’s home in Eisenach (where Martin Luther translated the New Testament into German). However, it was not the end of our journey because the occupying powers ordered all refugees to leave town. My mother wanted to try to reach her parents, who lived in Potsdam, near Berlin. But our train was stopped in the city of Halle (Saale), and could go no further because all the bridges had been destroyed.

There we were, sitting on the concrete floor of the train station, together with many other families, hoping and waiting for an angel thought from God to show us a way forward—a way filled with blessings. Suddenly, my big brother, who was ten, said to my mother, “Mutti, this seems to be a big town. Maybe there is an institute for blind people here. And maybe they know our Papa!” This was the inspired answer we had been waiting for. My mother found a telephone that worked and the telephone number of a school for the blind, which she called. The school knew our father, and we were told, “Come right over!” And we did, joyfully. That is where our father found us four months later.

In a one-paragraph essay titled “Angels” in her book Miscellaneous Writings 1883–1896, Mary Baker Eddy wrote, “God gives you His spiritual ideas, and in turn, they give you daily supplies. Never ask for to-morrow: it is enough that divine Love is an ever-present help; and if you wait, never doubting, you will have all you need every moment. What a glorious inheritance is given to us through the understanding of omnipresent Love!” (p. 307). I think our family’s experience illustrated this so beautifully, assuring me that right now God is protecting and guiding everyone who calls on His name.

It was in Halle that I went to a Church of Christ, Scientist, for the first time. A little later, the church opened a Sunday School, where I loved to go every Sunday. And on Wednesdays, I eagerly attended the testimony meetings in church. I just loved what I learned there about God as a loving Father and Mother, and about my inseparable relationship to Him. And I had my first healings through my own prayers.

Today, in my prayers for the world, I am holding to the truth that our brothers and sisters everywhere are safe in the eternal and ever-present arms of divine Love. Will you, dear reader, do the same? Will you join me in knowing that the Christ comes to everyone over life’s “angry sea”—over whatever hardships they may be facing—speaks to them of God’s unending gentleness and care, and guides them to liberty, peace, and security? Let us include them in our daily prayers, affirming God’s love for His entire creation, as we are all the beloved daughters and sons of God. 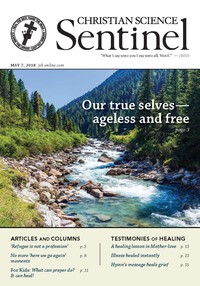