In the wake of shootings in the US and other similar tragedies, there has been a backlash across social media against individuals using the hashtag #thoughtsandprayers. Many see “thoughts and prayers” as empty words that mean nothing when it comes to creating real reform. The backlash has saddened me, even though I understand the frustration at the lack of action directed toward preventing these situations from happening again. But, as a person who prays, and who relies on prayer whenever challenges come up (whether in my life or in the world), I have never felt prayer to be passive. So, at the time this backlash became apparent, I realized that this was an opportunity to expand the understanding of prayer, to show that it really has nothing to do with inactivity or passivity, but can produce very tangible results. It was also a call to action to dig deeper to ensure that my own prayers weren’t simply empty words.

For me, prayer is not about petitioning a far-off God in the hope that we will find favor with Him, and He will give us what we want. Prayer is limited when it’s focused mainly on personal benefit. Instead of approaching it with the goal of gaining something for ourselves, we should allow prayer to lead us naturally to a deeper and more expansive love that includes everyone. This actually requires a lot from us, because it requires us to let go of human will and our own personal agenda, and yield to the path God is moving us to take.

I wanted to see, even in the midst of hostility, the effectiveness of prayer.

Mary Baker Eddy, the Discoverer and Founder of Christian Science, states in her book No and Yes, “True prayer is not asking God for love; it is learning to love, and to include all mankind in one affection” (p. 39). The affection she mentions is not simply a human sense of love. Instead, it comes from a clearer understanding of God as divine Love, and of each of us as the expression of Love (see I John 4:16), as Jesus so clearly demonstrated in his healing ministry. This kind of affection is truly all inclusive and, more importantly, brings transformation—the shift in thought and action that enables us to demonstrate this expression of divine Love in every aspect of our lives, including our interactions with others.

Let me give you an example: Around the time of the public mass shooting in Las Vegas, I had been praying to address division and aggression. I was asking God for opportunities to play a more active role in bringing a deeper sense of unity and harmony to those around me—to heal the anger and division we see so often in the world.

One day, as I was on a train heading home after visiting family, I began working on my laptop. Soon after the train left the station, a young man sat down next to me and asked what I was working on. After I mentioned that I work for my church, he launched into a very loud and profanity-ridden lecture about how horrible he thought religion was. He accused me of profiting from spreading lies to ignorant people and said he wanted nothing to do with me.

In spite of this alarming reaction, I knew I had a choice in how I responded. For a brief moment, I did consider simply turning away, putting my headphones back on, and going back to working on my computer. But I wanted to put what I had been praying about and studying in Christian Science into practice. I wanted to see, even in the midst of hostility, the effectiveness of prayer.

What resulted was a two-hour conversation that, at times, included others in the train car who were listening with rapt attention, and who would jump in from time to time. I found prayer really helpful in listening for the words that would express God’s love in responding with compassion and patience, no matter how aggressive this young man was in sharing his views. It was a lively conversation that explored the power of love, differing concepts of God, and life’s purpose. He and I actually hugged at one point, each expressing appreciation for the other even if we didn’t see eye to eye.

I thought about him a lot over the next couple of days. I was really cherishing the idea that each one of us can palpably feel God’s love in our lives each day. There had clearly been a shift in both of us in how we perceived each other—seeing through the things that would try to divide us and being able to demonstrate a genuine appreciation of each other.

Note that this kind of prayer doesn’t simply help us in the tricky situations we find ourselves in; it also makes us more aware of the needs of those around us and instills in us an innate desire to bring help and healing to others. Following the passage from No and Yes quoted earlier, Mrs. Eddy continues, “Prayer begets an awakened desire to be and do good.”

This is one of many experiences that has shown me that prayer and action go hand in hand. Prayer heightens our awareness of what needs our attention, and it directs us to an inspired course of action. This guidance may be different for each person. But we can be supporting and encouraging each other even as we are led in our own ways of responding. Prayer may lead us to get actively involved in working toward solutions on a community-wide or nationwide basis. Other times, prayer may lead us to something more humble, such as finding ways to be more patient and loving in communicating with others, even when faced with aggression.

Instead of prayer being a passive practice, it is an active and effective one; it can lead naturally to shifts in thought—even total transformations—that bring healing to relationships between individuals, community members, and countries. It can be a powerful guide for our interactions with others, while deepening our understanding of the inherent connection we have with one another as individual reflections of the Divine. Turning to God for the path forward lifts us all out of mortal and limited concepts of ourselves and each other, and into the understanding of our true selfhood as sons and daughters of God. This is prayer in action. And it heals. 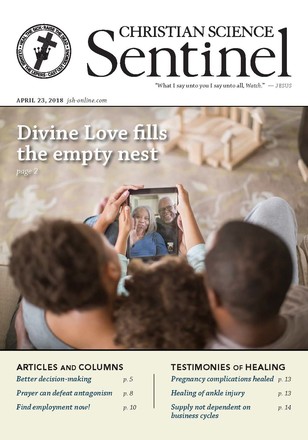 My arm was totally healed

Supply not dependent on business cycles

Measuring the kindness of strangers

By The Monitor’s Editorial Board | April 2018

The thunder of a spiritual idea