I wish to express my gratitude for the healing power of prayer as proved to me so convincingly through Christian Science. About eight years ago I was in a great extremity. I had lost my business and was drinking very heavily. When I prayed to God for deliverance, the thought came to try Christian Science, of which I had heard through a dear one. In the telephone directory I found a practitioner located near my home, and an appointment was made for the following day.

The practitioner told me of God and of His love for all His children. Right thoughts began to replace the many wrong ones I had entertained, and that very day I had an instantaneous healing of the drinking habit. I had been drinking almost every day for over twenty years. The practitioner continued to work for me, and I attended Christian Science lectures and daily studied the weekly Lesson-Sermons in the Christian Science Quarterly. Wonderful progress was made in my daily life; home conditions improved, and new business activity was provided.

Several months after I began the study of Christian Science, a testing period presented itself. I was stricken with a fever, and I lost about forty pounds in several weeks. Great fear was felt by my wife and by loving neighbors, who told her I was passing on. I was holding to the truth, as taught in Christian Science, but fear of a lung condition which had prevented my acceptance into the Armed Services kept presenting itself.

Arrangements were made for me to go to the Sanatorium of the Christian Science Benevolent Association, Chestnut Hill, Massachusetts. I was flown to Boston and was met at the airport by an attendant who drove me to the Sanatorium. There I was greeted by a loving associate, and I went to bed immediately and had a comfortable night's rest.

The next morning I was able to dress and go to the dining room for breakfast. One of the guests at the table asked if I would like to take a walk with him, and I accepted the invitation. As we walked, I had a wonderful feeling of God's presence, and I was instantaneously healed. The loving support of the practitioner will always be remembered.

Realizing the wonderful blessings I was receiving in Christian Science, my wife began attending a branch church with me and is now a member and an active worker. For membership in The Mother Church and a branch church, for class instruction, and for the privilege of serving on various church committees, I am grateful beyond words.—Edwin Johnson, Baltimore, Maryland. 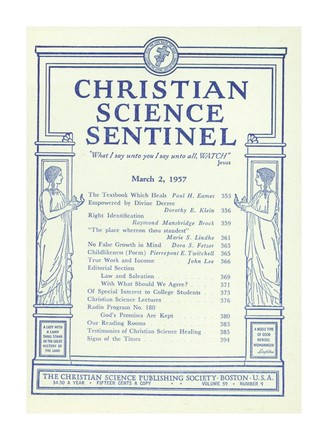 THE TEXTBOOK WHICH HEALS

"THE PLACE WHEREON THOU STANDEST"

NO FALSE GROWTH IN MIND

WITH WHAT SHOULD WE AGREE?

I am grateful to Christian Science...

It is with a sense of joyous gratitude...

I feel it is my privilege and duty...

An experience that occurred over...

By Edith Lange with contributions from Hilderic Edward Leadbeater | March 1957