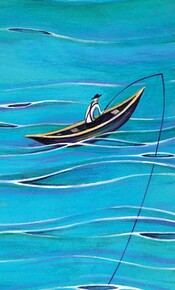 Every now and then an individual with extraordinary vision comes along. And through unflagging focus, courage, and persistence, that person leaves humanity with totally new and improved ways of doing things. Think of Thomas Edison, Henry Ford, and in our time, Steve Jobs.

We read biographies about such individuals because we are curious about how they succeeded, and we want to learn from them. I find it helpful when reading a biography to identify exceptional talents and qualities as evidence of God working in the individual, rather than to focus on the person’s human personality. Even exceptionally talented individuals often have flawed personalities, and Steve Jobs was no exception, as is abundantly clear throughout Walter Isaacson’s biography titled Steve Jobs.

Consider, though, what Jobs’s adoring wife of 20 years told Isaacson: “Like many great men whose gifts are extraordinary, he’s not extraordinary in every realm. He doesn’t have social graces, such as putting himself in other people’s shoes, but he cares deeply about empowering humankind, the advancement of humankind, and putting the right tools in their hands.” How wonderfully he succeeded at that! As for overcoming his flaws, shortly before his passing, Jobs surprised Ann Bowers, a 1980s colleague, by asking her what he was like when he was young. She replied, “You were very impetuous and very difficult . . . but your vision was compelling. You told us, ‘The journey is the reward.’ ” He replied, “Yes, I did learn some things along the way . . . I really did.” And so can we.

As I read Isaacson’s book, I picked up more pointers on how to be successful than can possibly be mentioned here. For me, though, vision, focus, courage, and persistence top the list, and their value increases significantly when we consider them from a spiritual perspective.

The ability to see possibilities beyond what has as yet been imagined, and to translate that vision into concrete accomplishment, can be cultivated by anyone. That’s because, as the Apostle Paul once observed, “God is working in you to help you want to do and be able to do what pleases him” (Philippians 2:13, New Century Version). It pleases God to express His unlimited intelligence and goodness in His creation; and He is perpetually successful at this. So we are greatly helped when our first order of business each day is to open ourselves up to God in prayer, and let Him have His way with us.

Referring to God’s vision of man (everyone), Mary Baker Eddy wrote, “Man is God’s image and likeness; whatever is possible to God, is possible to man as God’s reflection” (Miscellaneous Writings 1883–1896, p. 183). Realizing this, we can seriously consider amazing new ideas that come to our thought and be convinced that they can be achieved.

Focus is important in any work. Keeping both the overall goal and the specific task at hand clearly in view enables one to say “No!” to mental and physical distractions, to taking on responsibilities that others can do, and to giving in to unhealthy tendencies.

Our moments are greatly improved when we keep out thought wide open to divine Mind's unbounded vision.

Referring to the healing practice of Christian Science, Mrs. Eddy said: “Christian Science is not an exception to the general rule, that there is no excellence without labor in a direct line. One cannot scatter his fire, and at the same time hit the mark” (Science and Health with Key to the Scriptures, p. 457).

Without setting specific goals, and focusing on achieving them, our days can all too easily slip by without much being accomplished. On the other hand, taking a few moments in the morning to consider the day’s tasks, and setting priorities, can go a long way toward saving wasted steps. Also, missteps can be avoided when our first priority is to humbly listen for and follow God’s guidance throughout the day, even when it differs from our original plan.

Shifting priorities as a result of divine influence, however, can take courage. It means putting more trust in God and less in self-satisfaction or self-distrust. Think of the young man who came to Jesus with a very high goal in mind—to inherit eternal life (see Mark 10:17–25). When he assured Jesus that he had obeyed the Commandments faithfully, Jesus indicated that much more was required. He told the man that he needed to sell all of his material possessions, give to the poor, find treasure in heaven, take up his cross (self-sacrifice), and follow in the spiritual path of the Christ. The young man walked away disappointed. We don’t know whether he later found his courage.

People with vision are often bombarded with skepticism and resistance from within or from others who say that their vision shouldn’t or can’t be achieved, or that it certainly can’t be done profitably. It was heartening to me to see how an innovator like Steve Jobs kept his vision intact and refused to compromise the quality of his products for the sake of profits. It took courage to do that. He and his company prospered, and the world is the benefactor.

Courage is likewise needed and rewarded in the healing practice of Christian Science healing. When it comes to achieving something worthwhile for humanity, we can’t afford to be afraid of being different.

There is an old saying, “When at first you don’t succeed, try, try again.” I recall reading some years ago that Thomas Edison experimented over 100 times before he succeeded in producing the incandescent light bulb. When I was struggling many years ago to succeed in writing articles for the Christian Science periodicals, I was deeply humbled and inspired when I pondered how Mrs. Eddy revised Science and Health over and over again for 35 years to make its message clearer and clearer for humanity to understand and put into practice. In her article, “Improve your time,” she gives this potent advice: “Success in life depends upon persistent effort, upon the improvement of moments more than upon any other one thing” (Miscellaneous Writings, p. 230).

Our moments are greatly improved when we keep our thought wide open to divine Mind’s unbounded vision, focus our attention on achieving the unfolding possibilities, move forward with courage drawn from unselfish motives, and work day by day with unflagging persistence. With God working in us, we are sure of success. This is true for anyone in any worthwhile endeavor, including overcoming one’s own human shortcomings, and in becoming an effective Christian healer.

Barbara Vining is a Christian Science practitioner and teacher who lives in Perrysburg, Ohio. 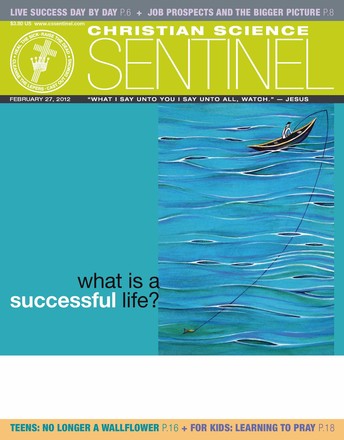 A beloved Bible that will never wear out

Message from the Clerk of The Mother Church

Job prospects and the bigger picture

What's your measure of success?

Soloist position at The Mother Church

No longer a wallflower

More than a believer–in Bangladesh

Health-care reform and the 'Supreme Court of Spirit'