When something bad happens, why pray about it? Why not just do the best you can and go forward with as much courage and good humor as you can manage?

A friend was honestly asking. I was trying to learn from his questions.

I could see he felt the world around him was pretty much the way it looked, that he took it the way it came—someone might say "the way life cut the deck and dealt the cards."

He had lived with admirable fortitude in the face of setbacks and sickness. "That's how the race has been surviving for generations," he said.

But I could also feel the chill force in my friend's sense of the world. He was essentially saying, "Human beings are incredibly alone. Whatever is to be done, they are going to have to do for themselves." The world he saw around him was, for better or worse, a solid reality, whereas prayer was to him something foreign and questionable.

Encountering this kind of cool, dispassionate "realism" had the positive effect of making me think more about just what I believed and why.

I realized the most compelling reason I pray is that I feel sure there is something there. When I pray I reach toward the divine intelligence and Love that I've experienced before. If it's a time of trouble, I know it's important to be in touch again with what has been most meaningful in my life. (Sometimes the feeling is that I would have done well to be in closer, more consistent touch sooner!)

A routine sense of living tends to dull spiritual sense and make us miss what it is actually possible to know. Someone who happens to live near the sea, for example, but who is deeply involved in making a living and carrying out all the ordinary tasks of life, may scarcely see the salt marsh, the far horizon, the changing colors of the ocean. All these may not mean very much to him, whereas they do to someone who sees them only briefly during a summer and values them all year long.

The basic standpoint of prayer isn't that of hoping someone or something will cause a change in the world but of recognizing that there is far more to the world than is generally apparent to a busy, frightened sense of life based largely on conventional impressions. When you have seen something of substantial, active spiritual reality, prayer seems not only sensible but necessary and something you want to be involved in. Because God, infinite good, is present, acting, governing, caring, healing, even though the general impression is otherwise, you want to be awake to that fact—that scientific fact, as Christian Science would describe it.

Prayer clears the head, as it were. It starts with God's all-presence and stays with this presence, thereby making us much more aware of what is. It leads to effective human action.

In other words, it isn't the case that the world and its ways are everything and we are trying to function as best we can within all this. That would indeed make prayer seem to be some tentative, small, insignificant venture. Instead, the truth is that the real world and the real nature of things aren't immediately obvious. You have to work to discern them. If God, Spirit, is Life itself and man's very nature is spiritual—as they are—prayer is one of the ways we get to know this all-embracing reality of things that has been so hidden by routine, conventional assumptions. Other ways include reading and studying what Christians find to be the most comprehensive record we have of people's spiritual experience—the Bible. Actively reasoning from a spiritual basis is also a help. And perhaps the most important thing not to leave out is loving unselfishly. Nothing breaks open a flat, material sense of existence the way love does.

At one point, when Jesus had been using parables to try to help people see what he saw, he said to his closest followers, "As for you, how fortunate you are! Your eyes see and your ears hear." Matt. 13:16 (Good News Bible). The King James Version reads, "But blessed are your eyes, for they see: and your ears, for they hear." It was evident he was strongly aware of the presence of something other than what was generally conceived to be reality. Through his daily example and teaching, he worked to open the eyes of his disciples to see it. He called it the kingdom of God, and he said it is to be found within each one of us.

Mary Baker Eddy, who discovered and founded Christian Science, points out, "False realistic views sap the Science of Principle and idea; they make Deity unreal and inconceivable, either as mind or matter; but Truth comes to the rescue of reason and immortality, and unfolds the real nature of God and the universe to the spiritual sense, which beareth witness of things spiritual, and not material." Miscellaneous Writings, p. 218.

Without this explanation and some experience of its utter practical truth, prayer and faith may seem foreign and dubious. They may seem to be merely superstitious or even weak in expecting something to be done through divine power rather than getting on with doing the best one can by oneself.

But when it begins to be apparent that the whole universe is in fact spiritual, then we feel new dimension and urgency to prayer. It is no longer merely a "religious" matter. It is the way you get to know reality, your own real nature as God's man and your actual relation to others. It is the way of the spirit of Christ, or Truth.

This Truth heals. Through letting it become more of an influence in our lives, we learn something new about the presence of health, of intelligence, and of practical human capacities we didn't realize were available to us. We begin to regain the real purpose of living, which is to come to know, and help others feel, the encompassing divine Love that is the Principle of everything real. 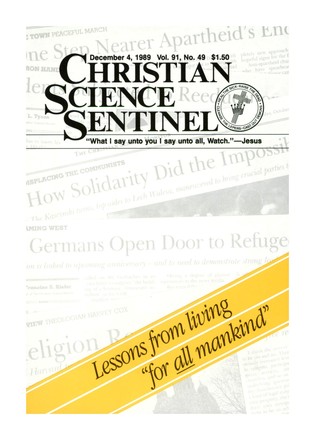 "It is the will of the people which will prevail"

with contributions from Nien Cheng | December 1989

Making the Monitor available to all mankind

God's government: justice for all

An agenda for loving

"Ye are of God, little children"

By The Christian Science Board of Directors | December 1989

Is it realistic to pray?

A willow by the watercourse

Last February my husband and I went on what should have...

By Kathleen Walker with contributions from Channing Walker | December 1989

One evening I was hit full-force in one eye by a tennis ball...

I can remember a time in my life, a few years ago, when I...

My due date came and went

The healing message of Christian Science