MY HUSBAND'S COUSIN AYTEN (PRONOUNCED EYE-TEN) IS SUCH A FRIENDLY, outgoing person—a very loving, unselfish Muslim woman. After having spent many years working in Germany with her husband and children, she is now retired and comes to visit Turkey for several months each year. Recently she came for one of those visits, and we got caught up on four years' worth of family news. The "breaking news" related to her recent two-day stay with her aunt (my mother-in-law).

As Ayten tells it, one of the highlights of her stay came when Auntie's neighbor ladies dropped by for a visit. Somehow the subject came to religion and prayer, and probably to Ayten's experiences while living in Germany. She told them she could pray in a church or a synagogue, just like she did in a mosque. What matters most, she told them, is that our God is one, and all these places of worship are houses of God. She explained how she prays to God wherever she is and tried to help them see prayer in a new light.

After listening to Ayten's story, I told her that prayer was also an important part of my life as a Christian Scientist, and that I was praying for peace in the Middle East. We discussed recent terrorist attacks and felt sad that such things are happening in our world today. She said her mother had taught her a saying that she tries to live by: Sana tas atana sen ekmek at—"Cast back bread to those who cast stones at you." I said that Christ Jesus had taught something similar when he said, "Love your enemies" (Matt. 5:44). We agreed that all three of the monotheistic religions had common ground, and that we could pray to better understand this commonality and help bring peace to the world.

Peace to the world, to the neighborhood, within our thoughts—it all comes from the same source, a trust that God's love is governing all. And "all" includes my husband and the woman who lives across the street. You see, many years ago when these neighbors first moved in, my husband, Yalcin, already was in the habit of parking his car directly across the street from our house—even though we have a driveway he could use, and there are other parking spots on our dead-end street. But our new neighbors (let's call them Mr. and Mrs. Love) felt as if they owned the parking spaces directly in front of their house.

So, these neighbors immediately started blocking our parked car by parking behind it so we couldn't get out unless we asked them to move. When one of their two cars was not at home, the other car would park so that it took up two spaces, depriving others on our street (especially my husband!) of a place. And when both of their cars were to be gone for more than an hour, they would have their company's cars and comes park in "their" two spaces. The ultimate insult came when we woke up one morning to find Mrs. Love's car parked in our own driveway—revenge for Yalcin's having parked in "her" place.

Yalcin was very sure parking spaces didn't belong to anyone in particular because he had gone to our neighborhood association and asked if, in fact, those two had been bought by the Loves. The people at the association informed him that those spaces were indeed public property. But they also warned him that the Loves were "tough customers," and not to get into any confrontation with them because he'd be sorry he had started something.

I MADE A PROMISE WITH MYSELF THAT WHENEVER TENSIONS WOULD RISE I WOULD LOVE.

I tried to calm down my husband whenever he wanted to retaliate. But the battle was on!Every time he would look out our kitchen window and watch what was going on across the street, he would grit his teeth—I could see his temples ripple and almost hear him growling. The Loves likewise would turn their heads the other way when they saw us, and even taught their little girl to shun us. A mini-Middle East war was being played out on our street, and there was no sign of a turn-around in sight.

I knew that this situation called for prayer, and that's what I'd been doing, but not very persistently. Then I made a promise with myself that whenever tensions would rise, I would love—love my husband, love the family across the street, love everyone in our neighborhood. Just love, love, love. The Christian healer and teacher of healing, Mary Baker Eddy, once posed the question, "What is the best way to do instantaneous healing?" She eventually answered her own question by saying, "It is to love! Just live love—be it—love, love, love" (We Knew Mary Baker Eddy, Boston, The Christian Science Publishing Society, 1979, p. 134).

Since it's almost impossible to sincerely love reactive, warring personalities, I realized I had to see everyone involved through a spiritual lens—as God, divine Love, sees them, and as He created them—made "in His own image" (see Gen. 1:26, 27). That prayer of seeing everyone, including myself, as God's children, made it possible for me to love all involved, truly, from the heart.

I wish I could say that this dead-end street relationship has turned into an open-ended love feast, but it hasn't, yet. Yes, there have been nuances of improvement—good-morning waves from both sides of the street, a smile from their teenager, a harmonious resolution of trespassing on garbage-can rights.

As in the larger Israeli-Palestinian conflict, so on our street, the need is for patient, persistent, loving prayer to see everyone as innately peaceloving and peacemaking children of the one Father-Mother God. Through my prayers, I'm coming to trust that divine Love can and does govern each motive, each act, of each person on this planet.

Cousin Ayten and I are both peacemakers in our own way, praying to the one God and Father, whether in mosque, church, or synagogue, on whatever continent we may find ourselves. Our spiritual journeys are moving along two different roads, but neither way is a dead end, and we share the hope of reaching our shared destination: knowing God as He really is—as all-loving and present everywhere—and valuing all people as made in the divine likeness, and therefore peaceful and peacemakers.

Gloria Onyuru and her husband live in Ankara, Turkey. 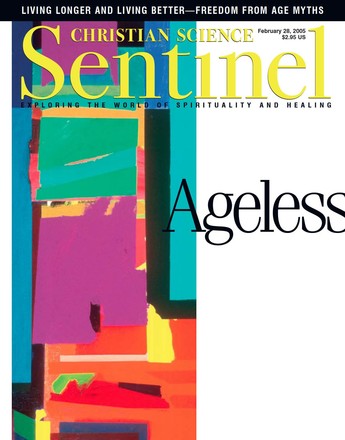 ON AN UPWARD PATH

A HEALTH NOT MEASURED IN YEARS

with contributions from David Degler | February 2005

MY 'CHANGE OF LIFE' PRAYER

A LOOK AT LIFE

AS GOOD [AND AS WELL] AS IT GETS

PEACE ON EVERY ROAD

TRUSTING WHAT GOD HAS WRITTEN

THE ETERNAL, TRUE, AND UNCHANGING

DIAGNOSED CATARACT GONE WITHOUT A TRACE