The Apostle Paul, who traveled widely in the region spreading the gospel of Jesus Christ, took particular interest in the Christian community working to establish itself in the very heart of the Roman capital city. In his letters to Jesus’ followers, Paul clearly wasn’t attempting to convince them to somehow expend their efforts along the lines of conventional power politics. Rather, time and again, he encouraged these dedicated men and women to grasp how vital prayer and spiritual-mindedness would be in truly changing their world for the better. For example, in the Bible, Paul’s letter to these Roman Christians offers a stirring testament to the transformative spiritual power the gospel of Christ could actually have in a person’s life.

A verse from Paul’s epistle may be especially pertinent today. It provides both spiritual and practical guidance on how to make our way through the jungle of divergent political viewpoints and the too-often vociferous arguments over what is best for society. According to the King James Version of the Bible, Paul wrote in Romans 12, verse 2, “Be not conformed to this world: but be ye transformed by the renewing of your mind, that ye may prove what is that good, and acceptable, and perfect, will of God.”

Other translations provide additional insight on that verse. The New Living Translation, for example, offers this: “Don’t copy the behavior and customs of this world, but let God transform you into a new person by changing the way you think. Then you will learn to know God’s will for you, which is good and pleasing and perfect.” And J. B. Phillips’ translation states directly: “Don’t let the world around you squeeze you into its own mould …” (The New Testament in Modern English, Revised Edition).

To be willing to think for ourselves from a more spiritual basis, not to be influenced by selfish outside interests, not to be squeezed into a constricting mold of untested human opinions—this provides a foundation from which to pray earnestly and to discover what is true and beneficial for our own lives, as well as for society’s progress. We begin to see more clearly how discerning and following God’s will can make a positive difference.

When our thinking and actions are motivated first by quietly listening for God’s direction, our involvement in working to improve society and government will be unbiased by merely material viewpoints or selfish ends. And such efforts will be honestly impelled to accomplish goals that prove to be for the greater good of our neighbors, our communities, and our world.

In a straightforward manner, Mary Baker Eddy offered the Golden Rule as a model for progress.

Mary Baker Eddy, who discovered Christian Science, took a keen interest in what was occurring in society during her own lifetime. In December 1900, for example, at the turn of the century, she contributed a short item for the New York World newspaper. “To my sense,” she wrote, “the most imminent dangers confronting the coming century are: the robbing of people of life and liberty under the warrant of the Scriptures; the claims of politics and of human power, industrial slavery, and insufficient freedom of honest competition; and ritual, creed, and trusts in place of the Golden Rule, ‘Whatsoever ye would that men should do to you, do ye even so to them’ ” (The First Church of Christ, Scientist, and Miscellany, p. 266).

Mrs. Eddy clearly foresaw the dangers should divisive politics and the mere pursuit of human power overshadow the higher purpose of considering the legitimate interests of others. In a straightforward manner, she offered the Golden Rule as a model for progress. And according to Christian Science, such unselfish consideration for our fellow men and women is empowered by our understanding of the true nature of God and His creation.

God, as pure Spirit and wholly divine Love, has created each of us in His likeness—as the reflection of that very Love. To love one another as we would be loved—to do even so to them as we would have them do to us—has a transformative effect in human life, especially when it is based on the spiritual acknowledgment that we are all the children of God, that we are each God’s expression of divine Life, Truth, and Love, that no one is left out of His kingdom or unworthy of His care. This may seem simple in its approach, but it is also radical. It steps outside the conformity of materially minded self-interest that too often tries to direct politics, determine social policy, and even define how we conduct our day-to-day lives.

As Mrs. Eddy has also written in Science and Health with Key to the Scriptures: “The time for thinkers has come. Truth, independent of doctrines and time-honored systems, knocks at the portal of humanity. Contentment with the past and the cold conventionality of materialism are crumbling away” (p. vii).

No one has to be squeezed into the mold of merely materialistic viewpoints. Each of us can be inspired through prayer and be “transformed by the renewing of [our] mind” to think and act more spiritually, unselfishly, and productively—to make a healing difference in our communities, in politics and government itself, and in building a truly ethical and caring society. It is indeed a potent reminder for today: “The time for thinkers has come.” 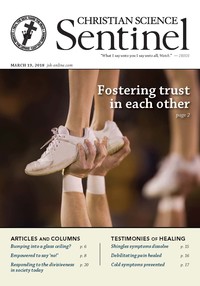