This past spring, the day after his sixteenth birthday, one of my close friends committed suicide. When I found out, I was so in shock that I was quiet for a while, and then the tears came, and they followed me basically everywhere I went. My mind couldn’t focus on anything but him.

The first day back at school after everyone had heard the news, my first class was health, and the unit we were studying that week was “suicide.” Everyone was quiet until the teacher spoke. We knew what she would say. Then, suddenly, the tears came again, and this time I wasn’t the only one crying. Tears led to hugs and “I love you’s” among classmates, and we all realized we weren’t alone and we never had been.

For many months, I tried to understand why my friend had done it, and I kept replaying the time I had seen him last, like a video clip stuck on repeat. I couldn’t stop wondering if I should have said or done something different, and wishing I had. I kept asking myself, “What if I had sat and talked with him a little longer? What if I had offered to walk home with him? What if I had laughed more when he told that joke or hugged him a little tighter when he said hello?” It took the longest time for me to finally accept that I couldn’t change what had happened. The hurt inside me wanted so badly to fix the pain that his absence had caused in so many lives. I felt a strong urge to pray about him and the effect his loss had had on the surrounding community, so I did.

In Science and Health with Key to the Scriptures by Mary Baker Eddy, I found a lot of good ideas to think about. In the Glossary, death is described as “an illusion, the lie of life in matter; the unreal and untrue; the opposite of Life” (p. 584). I loved knowing that we never come to an end. No matter how much I was led to believe my friend was gone, I just kept turning to this quote and reminding myself that he was and always will be living and moving forward. The good he shared will always be with me. When I think of him, I have a collection of memories that he has given me to keep. His absence had felt so hard to believe—and this quote’s confirmation of my thoughts was somehow reassuring and comforting. It felt like an angel message from God telling me He never stopped caring for my friend.

I know no fear, with Thee at hand to bless,
Sin hath no power and life no wretchedness;
Health, hope and love in all around I see
For those who trustingly abide in Thee.

I know Thy presence every passing hour,
I know Thy peace, for Thou alone art power;
O Love divine, abiding constantly,
I need not plead, Thou dost abide with me.

Christian Science Hymnal, No. 7, verses 2 and 3

On pages 468–469 of Science and Health, the answer to the question “What is Life?” also helped me. It says that “Life is divine Principle, Mind, Soul, Spirit.” Life is a synonym for God, and God is eternal. So, logically, this means that if Life is God and God is eternal, Life is eternal. “Life is without beginning and without end,” so, my friend’s life couldn’t really have ended. I also liked this: “Eternity, not time, expresses the thought of Life, and time is no part of eternity.” I began to see that my friend’s life was not about expired time.

Since “Life is neither in nor of matter,” I also learned that my friend’s life can’t be “in matter.” It’s spiritual and never ending. And finally, I like this quote, “In divine Science, God and the real man are inseparable as divine Principle and idea” (Science and Health, p. 476). Basically, this meant to me that God, Life, is always with you, so no one can be separated from God.

Today, I still sometimes cry when the subject of suicide is brought up, but I undoubtedly know that the qualities my friend expressed are with me in my heart. I have come such a long way because of the loving support I received from my friends, family, and from Christian Science. And I believe I wouldn’t have healed as fast without them.

Sierra Morehardt is a sophomore in high school. 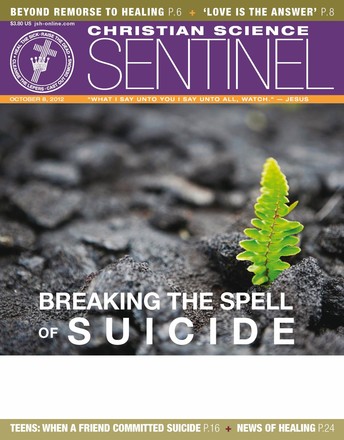 You have a better friend than suicide

Beyond remorse to healing

'Love is the answer'

Breaking the spell of suicide

Stopping the cycle of fear

When a friend committed suicide

Nothing in the way

The 7 ways of God's children