How a theme in the "court case" allegory healed

Late in the afternoon I began to feel ill. I had been on jury duty all day and had listened to testimony from a number of witnesses. The more testimony I heard, the worse I felt. As I drove home that evening I prayed, and the word "law" kept coming to my thought. When I got home I checked references to the word in the Concordance to Science and Health and was led to read Mrs. Eddy's allegory of a court case. See Science and Health, pp. 430-442;

In this allegory a man is charged by Personal Sense with having committed liver complaint, and a number of witnesses give testimony against him—among them Health-laws, Coated Tongue, Sallow Skin, Nerve, and Mortality. He is found guilty, and is sentenced by Judge Medicine. As I read this, I could see that these same witnesses were trying to give evidence against me. Health-laws was arguing that I had broken one of its laws and would have to pay the penalty. Nerve claimed to rule my body and to convey messages of ill health to me. Personal Sense argued that I would have to go to bed and would not be able to go back to jury duty the next day.

As I continued to read, I found that the decision of Judge Medicine had been appealed to the Court of Spirit. In the trial there the testimony of all the former witnesses was challenged and proved to be false. Christian Science, acting as counsel for the defendant, argued that no spiritual law had been broken and that there was no law to punish anyone for helping his fellowman. It became clear to me that I too had broken no spiritual law and therefore need not accept any penalty for transgressing so-called material health laws. I was about my Father's business, always under His protection. Claims of illness were without support from divine law.

I saw that I was actually the spiritual image of God, as the Bible declares, continually expressing His intelligence, freedom, and wholeness, and in inseparable union with Him. Identifying myself in this at-one-ment, I had complete dominion over all the suggestions of mortal mind and its false witnesses. I could follow Mrs. Eddy's encouraging words in Science and Health: "Rise in the conscious strength of the spirit of Truth to overthrow the plea of mortal mind, alias matter, arrayed against the supremacy of Spirit." ibid., pp. 390-391;

I acknowledged that God's law was supporting me and that there is no other law. As I continued to pray in this manner, I became engrossed in these truths, and within a short time I was completely healed. Later that evening I was able to attend an important meeting. Moreover, I was able to serve on jury duty the next day.

In court cases, many witnesses may appear and give evidence and it is up to the jurors to be alert, should a witness fail to tell the truth. This requires careful weighing of the evidence. Similarly, it is up to each of us to follow the injunction in Science and Health: "Stand porter at the door of thought. Admitting only such conclusions as you wish realized in bodily results, you will control yourself harmoniously." ibid., p. 392; Hatred, fear, jealousy, or loneliness may seek admittance to our thought. But when we question them closely, we see that since they are false witnesses without any right or legitimacy they can be denied entrance.

The five physical senses will always give us false evidence. They cannot know the truth of being or testify to it. But "spiritual sense can bear witness only to Truth." And through spiritual sense God is constantly communicating His truths to each of His perfect children. In the words of Paul, "The Spirit itself beareth witness with our spirit, that we are the children of God: and if children, then heirs; heirs of God, and joint-heirs with Christ." Rom. 8:16,17. As we listen to God, we are able to contradict the testimony of the material senses and prove that we are indeed "heirs of God, and joint-heirs with Christ." We find that Spirit is our only witness and is constantly testifying to our perfection. 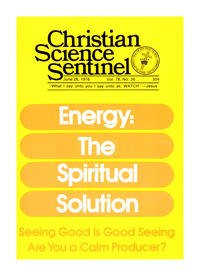