Mark Sappenfield
Recent events in India and Pakistan have deepened my appreciation of how the Christ operates to destroy deeply rooted claims of evil anywhere in the world.

In my two and a half years of traveling South Asia as a writer for The Christian Science Monitor, few things made more of an impression on me than the corrosive impact of corruption on the lives of individuals and the health of nations. I watched opportunistic policemen set up roadblocks to extract bribes from passing motorists. I met politicians who treated their seat in parliament like a birthright, exacting from their public office lucrative business deals and personal favors. I stood among women and children who had to collect their daily allotment of fresh water from the backs of trucks because a government riddled with self-serving bureaucrats had failed to install safe taps.

But now, there are growing signs of a backlash. In India, last summer’s hunger strike undertaken by Gandhian activist Anna Hazare spawned unprecedented public support. In Pakistan, the long-mocked Justice Party, founded on a platform of anticorruption, recently held a public rally of 100,000 people, and its leader tops national opinion polls.

Political pundits look at these movements and try to gauge their staying power and potential impact. I am grateful that, as Christian Scientists, we have the surer words of Jesus, who told the pundits of his day: “Ye can discern the face of the sky; but can ye not discern the signs of the times?” (Matthew 16:3).

Corruption has no real power, either over our lives or over any events of the world.

With her deep understanding of Jesus’ words and works, Mary Baker Eddy helped us understand the nature of the Christ, and how it is always at work in destroying error. This destruction, Mrs. Eddy said, often comes in stages—the more obvious forms of error first and the subtler forms later. Looking at the struggle in the United States to overthrow slavery, she wrote: “Legally to abolish unpaid servitude in the United States was hard; but the abolition of mental slavery is a more difficult task. The despotic tendencies, inherent in mortal mind and always germinating in new forms of tyranny, must be rooted out through the action of the divine Mind” (Science and Health, p. 225).

More than 60 years ago India threw off its most obvious manifestation of “servitude”: British rule. Now, the progressive action of the Christ is laying bare the more “despotic tendencies” of corruption, which are mentally deep-seated and spiritually tyrannous.

Corruption would try to subvert the dignity and prosperity of individuals and nations by suggesting that those in power have the need, even the privilege, to prey upon the weak. This self-serving state of thought must be a wake-up call for each of us. Corruption has no real power, either over our lives or over any events of the world. It is only a fear of lack or a love of power; and Christ Jesus destroyed those errors in the wilderness 2,000 years ago. To the first, he said that God’s Word—the truth about our connection to the Source that meets every need—is more than sufficient to sustain us. To the second, he said only, “Get thee hence, Satan” (see Matthew 4:1–11).

Any claim of corruption that comes to us—be it a dodgy contractor or a congressman on the take—in reality has nothing to do with the person at all and has no power to harm. The intent of corruption, like all evil, is to hide the constant operation of good, of the Christ. As we understand, as Jesus did, that nothing can hide the operation of the Christ, this prayer will destroy every error of the sort and redeem those around us from the belief of corruption.

“We should look with pitying eye on the momentary success of all villainies, on mad ambition and low revenge,” Mrs. Eddy wrote. “This will bring us also to look on a kind, true, and just person, faithful to conscience and honest beyond reproach, as the only suitable fabric out of which to weave an existence fit for earth and heaven” (Miscellaneous Writings 1883–1896, p. 228).

Mark Sappenfield is the deputy national editor at The Christian Science Monitor. 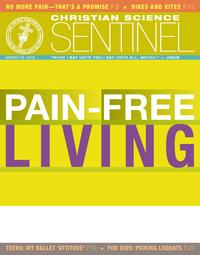