I’m discovering that there is a “higher” way—a more confident, inspired, joyous, humble, healthful, and fearless way to think, work, and act. It comes from following God alone. The book of Isaiah says: “My thoughts are not your thoughts, neither are your ways my ways, saith the Lord. For as the heavens are higher than the earth, so are my ways higher than your ways, and my thoughts than your thoughts” (55:8, 9). Striving to follow this “higher” way is a blessing for us and for all mankind. And it’s ours for the asking, through heartfelt prayer and diligent demonstration of the good that is God.

I began to value all I did know: that God is infinite, and that we have limitless access to good.

Years ago I was approached by a friend who was retiring from our city council. She was despairing because no one was coming forward to run for office who she thought had the necessary qualifications to meet our city’s needs. She asked if I would consider running. After much discussion and prayerful consideration, I agreed.

I read, did research, and talked with others to educate myself about the issues, the precedents, and the people involved, but was soon overwhelmed by all that I did not know about this public office. Then, a light went on in my thought, and I began to value all that I did know: that our Father-Mother God is infinite, and that we, as Her children, have limitless access to illimitable good. We may only see a part of this good now, but our eternal source of good is complete and constant in Her expression of wisdom.

During my campaign, I saw a handbill from one of the local workers’ unions posted in a downtown merchant’s window. It said that I did not have the best interest of the city workers in mind and should not be elected. This was disturbing, as nobody had spoken to me of their concerns or objections.

I decided to turn to those higher ways of thinking and follow God’s lead. I was reminded of Philippians 4:5–7, which says: “Let your moderation be known unto all men. The Lord is at hand. Be careful for nothing; but in every thing by prayer and supplication with thanksgiving let your requests be made known unto God. And the peace of God, which passeth all understanding, shall keep your hearts and minds through Christ Jesus.”

The “peace of God” manifested itself in this situation as praise. I found myself no longer praying for answers or specific direction but offering prayers of praise and gratitude that the Christ, Truth—which Jesus expressed and is still with us today—is always in control, guarding and guiding our every thought and action. A sense of pressure that had been building in my thought disappeared, and I was filled with the certainty that God’s way is entirely good and that my duty is to follow Her lead. Regardless of the outcome of this particular opportunity, the result would be a blessing for all. I pressed on and was elected.

City contract negotiations came soon after the election, and I discovered that three of our five unions had been working without a contract for years. After weeks of unsuccessful talks between the unions and our city attorney, I asked permission of my fellow council members to participate in the negotiations—an unprecedented move. This was another opportunity to listen to God and follow Her way. I chose not to listen to the chatter of personal opinion, nor be depressed by past precedent, nor revel in any one party’s domination of another. Instead, I could trust the one infinite Mind, God, and I felt a great peace before making this suggestion. Soon after joining the negotiations, I was led to propose inviting a federal mediator to visit our city and conduct a workshop on negotiating, and the proposal was approved.

In the divine Mind, we find wisdom and deliverance from confusion.

Though contentious at times, the workshop was productive, and weeks later we were able to present to the city council an equitable pay plan with the unanimous agreement of the city and its employees. This plan is in effect to this day.

There is help in difficult times through a realization that we are not alone as we try to determine the wisest course of action. We are never governed by many ruling minds and powers but by the one infinite Mind, God—supremely intelligent, impartial, and ever active. In this Mind, we find wisdom and deliverance from confusion. We find peace instead of anxiety, as well as clarity, sanity, and maturity. And even in what seem to be very dark hours, we can rejoice, and experience and express gratitude.

“The Lord is at hand.” God will never forsake you. God is in control. 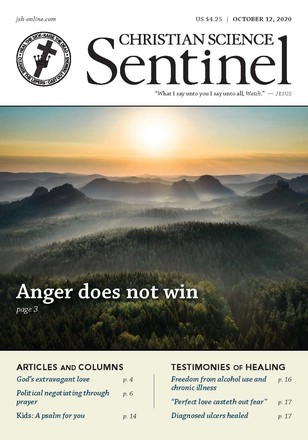 What’s coming in the Sentinel?

Anger does not win

How the twenty-third Psalm led us to our home

Seeking a spiritual path to health

A psalm for you

Freedom from alcohol use and chronic illness

The bond of love that dissolves injustice