Valuing the Golden Rule in the workplace

In today’s rapidly changing economy, the Golden Rule taught by Christ Jesus centuries ago may sometimes seem antiquated or even naive. As it’s stated in the Bible, the rule reads, “In everything do to others as you would have them do to you” (Matthew 7:12, New Revised Standard Version). Impractical as it may sound in our rough-and-tumble world, this rule of life has persisted over the centuries. That’s because it’s based on a divine law of universal harmony established from the beginning by God, the divine Principle, Love.

The Bible records God as saying, “I will put my law in their inward parts, and write it in their hearts” (Jeremiah 31:33). Every one of us is hard-wired, then, with God’s law as an essential ingredient in our moral makeup. These laws govern all men, women, and children in harmony, wisdom, and brotherly love.

It’s worth noting that the Golden Rule is first and foremost a guide for our own actions. It requires doing—not just passively wishing that others would do the right thing so we can be blessed. When obeyed, this rule leads to unity with our fellow men and women. It brings blessings in the workplace and defends us from the influence of selfishness, inhumanity, deceit, and greed.

God, being the only ruling power, doesn’t have to somehow reach miscreants and make them behave according to the divine will. The divine government operates consistently, justly, and without real opposition. Because this is the spiritual fact, it is natural for us to pray about any evidence that would argue for injustice in the workplace, no matter who perpetrates it. Such injustice may be motivated by a desire for personal gain, fear of losing a job, or even of being thought too weak to succeed in a cutthroat marketplace. But these are never part of God’s plan for anyone. Praying about them, whether they are personally affecting us or not, is acting on and living the Golden Rule.

Mary Baker Eddy, who discovered the laws of divine Science that underlay Jesus’ healing ministry, defined prayer this way in her short work, No and Yes: “Prayer is the utilization of the love wherewith He [God] loves us” (p. 39). To me, this is again an action, a doing. Our sincere desire to love as Jesus loved, to obey only the divine laws of good, to honor God, the one Mind, as the source of all action and wisdom, gives us a firm basis for harmony and blessings wherever we work.

When we begin with an omnipotent God as our guide and protector, everything changes.

This doesn’t mean that we won’t have challenges or rough spots along the way. But if we start with the problems, we may find ourselves in some pretty murky mental waters, dwelling on injustice, feeling fearful or discouraged. When we begin with an omnipotent God as our guide and protector, however, everything changes. We are refusing to assign real power to people (including ourselves), to corporations, or to economic conditions, and we are trusting in God’s all-power to guide us and the people we work with. Even in cases where the evil is aggressive, humiliating us, and threatening our livelihood, active living of the Golden Rule can bring answers that often surprise and delight us in their originality, precision, and blessings for all.

An experience was shared with me that highlighted this “doing” of the Golden Rule and the blessings that brings. A newly promoted division head actively worked to provide access to jobs and promotions for women in an area where few opportunities for women had existed. This commitment had come from his prayer about the equality and worth of both sexes. After several years of these successful efforts, two women under him filed a complaint seeking his termination, alleging misconduct in several areas, including gender bias. It seemed particularly egregious since he had been prayerfully basing his actions on a desire to overcome sexism in the workplace.

While it was a struggle for this individual to go to work each day, much less to hold a charitable thought about these women, he prayerfully affirmed the right of everyone involved to be free of impositions—grievances without basis, envy, feelings of victimization, and misjudgments. He truly wanted them to be free of anger and resentment, and he wanted all to be blessed. He made even greater efforts to treat these women the way he wanted them to treat him—with respect, appreciation, and graciousness. His prayers led him to a course of action that absolved him of any infractions, but it also occurred in such a way that it allowed him to work with the women to overcome the misunderstandings that had prompted their actions.

He went on to work with them harmoniously for many more years.

Even when it seems that others are disobeying the Golden Rule, we can do unto them what we would want done to us: prayerfully acknowledge that the one divine Mind is governing all, that God’s laws are written in their hearts and thoughts—and in ours. These laws govern universally with kindness, wisdom, grace, and selflessness.

All people can be free of the influence that would suggest they can find blessings for themselves by injuring or taking advantage of another. As Mary Baker Eddy wrote in her textbook on Christian healing, Science and Health with Key to the Scriptures, “In the scientific relation of God to man, we find that whatever blesses one blesses all, as Jesus showed with the loaves and the fishes,—Spirit, not matter, being the source of supply” (p. 206).

Utilizing the love with which God loves us will enable us to triumph over discord in the workplace and will elevate working conditions around the world. With the Golden Rule as the basis for our prayers and our actions—our doing—all are blessed.

Sarah Hyatt is a practitioner and teacher of Christian Science who lives in Charleston, South Carolina. She wrote this article after participating in a live audio chat titled “Bringing the Golden Rule to the workplace.” To hear the chat—in which she responds to site visitors’ questions about employment—go to sentinel.christianscience.com/golden-rule-at-work. 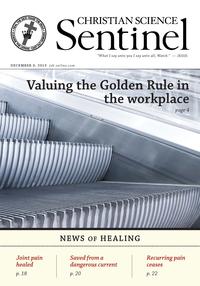