"Instead of magnifying evil by resenting it, we should recognize its nothingness"

Resentment might be said to be a reciprocation of the sentiment that one is deploring in another. Resentment always manifests some degree of hatred; it gives power and reality to evil; it proclaims at the outset one's inability to cope with a situation. It is essential, therefore, that the Christian Scientist challenge and overcome this archenemy to peace and progress.

Christian Science reaffirms the Bible truths that God is the only cause and creator; that His creation is wholly good, reflecting divine Principle, Love; that man, God's image and likeness, responds only to the good that comes from the divine source. These absolute truths must, however, be progressively demonstrated in human experience in the overcoming of all that is unlike God, good.

Every belief that man is a sinning mortal must be replaced by the truth that man is the reflection of God, forever glorifying Him. Instead of magnifying evil by resenting it, we should recognize its nothingness in the light of the allness of God, divine Love. The human expression of Love is seen as forgiveness, magnanimity, compassion, forbearance, meekness, patience. Unselfed love blesses all with whom it comes in contact. The belief that man, the child of God, can either inflict or receive an injury, even the memory of there ever having been an offense, must be blotted out; the egotism, self-will, and hurt pride that resent or perpetuate an error must be replaced by that infinite, self-forgetful love which can only forgive and forget.

When tempted to indulge in hurt feelings, the writer has found it helpful to remember that resentment and self-pity always tie one's hands behind one's back as far as successful demonstration in Christian Science is concerned and that in reality man is sensitive only to good.

Had Jesus borne resentment toward those who betrayed and crucified him, he could never have accomplished the resurrection, and the world might not yet have heard of his teachings. "Father, forgive them; for they know not what they do" (Luke 23:34) was his response to the cruelty meted out to him by the pride and self-righteousness of Pharisee and priest. How different was the reaction of Peter, as evidenced by resentment or animal courage he exhibited in cutting off the ear of the high priest's servant! And how sublime was the Master's rebuke in healing it!

Here we may ask ourselves which of these reactions is ours when confronted with hate, injustice, or aggression. Do we meet each of these with recrimination and bitterness, or do we say with Jesus (John 14:30), "The prince of this world cometh, and hath nothing in me," that is, finds nothing worldly in me—resentment, for instance—to respond to? Instead of the negative reaction of resentment, let us look upon each untoward incident as an opportunity to express that positive sense of Love which controls, heals, and harmonizes every situation.

Our beloved Leader, Mrs. Eddy, writes in her Message to The Mother Church for 1902 (p. 19), "The Christian Scientist cherishes no resentment; he knows that that would harm him more than all the malice of his foes." Had she resented the almost unbelievable opposition to the impersonal healing Christ she was to reveal to this age, she would never have succeeded in founding Christian Science on its permanent and unassailable basis. But because of her pure and unselfed love, her constant turning of the other cheek to each affront, in accordance with the Master's teachings, her never-wavering trust in the ultimate triumph of good, she was divinely sustained, and she prospered in every step of her stupendous work of establishing the Cause of Christian Science.

What is our reaction to criticism, correction, or rebuke? It is wise always to weigh criticism; if deserved, let us accept it lovingly and humbly and profit by it; if undeserved, why, indeed, should we resent it? If it is not true and if it meets no response in us, it cannot harm us. God will reveal our integrity and adjust and recompense any seeming wrong.

Resentment because of injustice done to another contains the element of hate although it may subtly try to justify itself as unselfed love. Like all resentment, it brings mental disturbance in its train, inflames thought, and claims to join forces with those of disease, always a phase of disturbed harmony. Actually our only responsibility is to heal our own thought regarding any situation or condition that confronts us; in reality God's universe, including man, is now, and forever has been, maintained in perfect harmony. All we have to do is to recognize this in order to bring out harmony in our experience. To sum up: We overcome resentment as we surrender self-righteousness, pride, and egotism; replace every degree of hate with love; and react and respond only to good. In so doing we glorify God; harmony appears in our experience; and we realize that man in God's likeness is the only man that has ever actually existed. 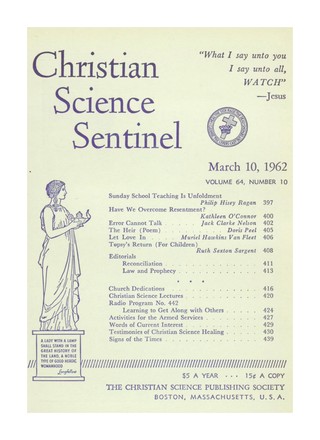 Have We Overcome Resentment?

RADIO PROGRAM No. 442 - Learning to Get Along with Others

with contributions from Delos Johnson | March 1962

I am deeply grateful to God for...

The physical healings I have experienced...

I wish to express my sincere...

For about thirty years I have...