By Jack Train
Most of us know better than to “stage” a Christian Science demonstration by intentionally placing ourselves in harm’s way. But this does not mean we must avoid vigorous, challenging activities that require skill, balance, alertness, and other qualities of Life and Soul. I’ve enjoyed such activities since boyhood, and continue to pursue them into what some consider a retirement age when one should begin “slowing down.”

Recently, a young friend and I decided to take a canoe trip down the Potomac river north of Washington, DC, to celebrate his National Leadership Council graduation and achievement of the Eagle Scout award. I have a lifetime of experience in canoeing and own a beautiful wooden canoe; Andy is athletic and adventurous and has plenty of experience in rafting. We both looked forward to our trip eagerly.

Prior to our trip, an unusual amount of rain had soaked the Northern Virginia region. When we arrived at the river, the water was high and swift. However, no cautionary signs were posted at the boat ramp of the public park, so we proceeded with our plan.

Not long into our trip we came upon Seneca Breaks, a stretch of river that usually contains rapids and rocks. That day, there were no rocks to be seen, only large waves crashing into each other. Partway through this dangerous stretch, a wave swamped us and we found ourselves being swept along by the most incredible current. It was impossible to right the canoe or even direct its path. Islands that ordinarily would afford protection and calm were totally submerged by rushing water. Dams of floating logs and debris pushed us and our canoe under and spit us further out in the turbulent water. When Andy became separated from the canoe during one of these underwater episodes, I was unable to do anything to regain sight of him or offer the canoe as a refuge. In fact, it was becoming increasingly apparent that the canoe was more of a liability than help, but I clung to it and the wooden paddles in hopes of somehow saving this dear old friend.

I spent almost 30 minutes in 53-degree water, trying to swim the canoe to some sort of resting place. At no time did I feel cold, tired, or fearful, even though after my first submersion under a log and debris raft, it was clear that both Andy and I could easily perish in these severe conditions. That thought was immediately rejected by the phrase, “I shall not die, but live, and declare the works of the Lord” (Psalms 118:17). I knew my job was to witness God, Life, and I couldn’t do that by accepting that death was possible. After all, I knew clearly that I could not be separated from God, Life.

A wonderful ditty shared by my Christian Science teacher flashed through my thought: “I am the place where God shines through, for God and I are one, not two. If I do not care, nor fret, nor plan, God will work through me where I am. If I remain at peace and free, God will work his work through me.” This comforted me and set me on my next thought, which was the confirmation that God’s “law of adjustment”—His law of safety and salvation—was operative right then. It was clear that I didn’t need to know how things were going to work out (for me to outline a preferred outcome would only delay its recognition); I just needed to trust in God’s harmonious disposition of events.

As I thought about Andy, fear and a false sense of responsibility tried to creep in. I continually affirmed that my prayers were effective, and that Andy was in the “arms of Love,” safe, and not lost. Many other helpful thoughts came to me over the time spent in the water, including “the scientific statement of being” from page 468 of Science and Health by Mary Baker Eddy, and Hymn 53 from The Christian Science Hymnal, which begins, “Everlasting arms of Love / Are beneath, around, above” (based on a hymn by John R. Macduff). I felt no fear, no pain, no cold. However, after I had been in the river for about a half hour, the thought came to me clearly, “Jack, it is time to get out of the water.”

I saw another island and swam to reach it, holding onto my canoe. I pointed the canoe bow at a raft of floating debris firmly trapped at the point of the island, hoping to run the boat on top. The canoe hit the raft of debris and ran up a few feet, stopped moving, and then the mighty water took the stern and flipped it under the raft. I used the moment of stillness to mount the floating debris and watched my canoe disappear from sight. Was its back broken? Did it continue downstream? I don’t know, but it had provided me with a ladder to freedom from the water.

As I stood on the remarkably sound debris raft, I began to shake uncontrollably. The unfelt cold of the water was claiming its power. Though my body shook violently for more than 20 minutes, I continued to affirm my oneness with God. I was led to shed most of my clothes and dry them out in the breeze and remaining sun. Within two hours I was calm, dry, and warm. I placed stray Styrofoam in my shirt to help me keep warm. My undershirt became a scarf and handkerchief a hat. There were about two hours left before darkness, but I knew I could make it through the night.

As I looked out on a beautiful but lonely surrounding, my thoughts continued to include Andy. He, too, relies on God and prayer as his “first aid.” (For “second aid,” he had his Boy Scout training and athletic conditioning.) He was wearing his life jacket, which would offer protection from debris and warmth at night. Both of us were praising God, I just knew it.

As the sun was beginning to touch the tops of the trees, I heard the distinct sound of a helicopter. When it flew over, I could see the pilot—but he did not see my enthusiastic waving. In another 20 minutes, a rescue raft emerged from below the island and did see my yellow life jacket. The rescue seemed almost uneventful. There was no condemnation for my decision to canoe. There was just joyful relief for both the rescuers and me. My “thank you” was met by a matter-of-fact “this is what we do.”

The helicopter found Andy about 30 minutes later. He and I were reunited hours later, as rescue crews from two different states had found each of us. Both Andy and I were confirmed to be in fine shape when the rescue team completed their required check. We were released without the customary trip to the hospital for a doctor’s observation.

I later learned that both my wife and Andy’s parents had felt strongly impelled to pray for us that afternoon. That divine leading was what nudged my wife to call 911 at around 6:00. The rescuers told her that if she had called any later, it would have been too dark to launch a rescue effort that evening.

Not only had we been delivered from the Potomac, but the predictions from our rescuers that we would probably be sick for a few days due to the quantity of muddy water we’d both ingested never materialized. In fact, I was grateful for the warning, so that I could immediately claim our exemption from mortal mind’s accepted laws. The “smell of fire” was simply not on us.

My Sunday School class and I had been studying the chapter “Prayer” in Science and Health, by Mrs. Eddy. My assertion that there is nothing more important than defending oneself and claiming our divine inheritance was certainly proved in my experience that day.

From my side of the canoe

When the canoe tipped us out, I was terrified. The water was freezing, and as I panicked, my breathing became short and shallow. Quickly, though, the thought came that I would be taken care of and that I just needed to calm down.

I was pulled along in the rushing water for a few minutes, wondering how I was going to get out, when I saw a tree branch hanging down in front of me. I grabbed hold of it as I went by and then slowly pulled myself up onto a log.

It was a pretty comfortable log considering the circumstances! It was stuck on another log, which was jammed up against a fallen tree in the middle of the river. I managed to crawl up onto the higher log so I was completely out of the water. Grateful for my protection, I surveyed the situation.

I was out in the middle of the river, about 100 yards from either side, and I knew from rafting experience that it wouldn’t be smart to try to swim. I started singing hymns from the Christian Science Hymnal to myself—as many as I could think of—to keep my thought upbeat and focused on God. I knew God was telling me what to do, even though it seemed like a tricky situation (a steep hillside). I was led to take off my outer clothes in segments and let them dry on a branch over the next few hours. My fleece jacket helped keep me warm.

As the sun was beginning to set, I thought, “Well, maybe I’ll be here all night,” but I continued trusting that I would be provided for. Angel thoughts kept coming to me, reminding that I was never separated from God, even in the middle of this river. I knew God would give me what I needed to have when I needed to have it.

To make a long story short, when the rescue raft came after about four hours, I thanked God profusely. I knew I had never been out of His care. This experience showed me what Jesus meant when he said: “Behold the fowls of the air: for they sow not, neither do they reap, nor gather into barns; yet your heavenly Father feedeth them” (Matthew 6:26). Rather than being fearful about food and shelter in a seemingly hopeless situation, I was able simply to trust God. 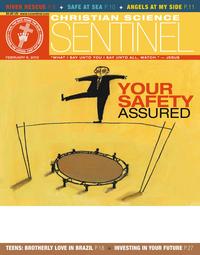