A Rock of stability for nations

When reading news accounts, I have come across the issue of weakness and apparent instability within some nations’ governments. Underlying factors appear to include alleged unethical decision-making and practices by some government leaders and officials, including a lack of adherence to the rule of law, which have ultimately resulted in a deficiency in controlling corruption.

If we look for stability in the governments of nations, what we sometimes find instead appears to be unreliable or tumultuous. And even what might appear to be stability from the viewpoint of the material senses and based on material thinking can never be lasting. Yet, when we view true government as spiritual, we recognize that it is stable, permanent, universal, unlimited, and actually invulnerable to any material influence. That’s because true stability, which includes steadfastness and reliability, has its origin in God, as is taught by the master Christian and Way-shower, Christ Jesus.

Referring to his teachings in the Sermon on the Mount, Jesus stated vividly, “Therefore whosoever heareth these sayings of mine, and doeth them, I will liken him unto a wise man, which built his house upon a rock: and the rain descended, and the floods came, and the winds blew, and beat upon that house; and it fell not: for it was founded upon a rock” (Matthew 7:24, 25). God was a Rock to Christ Jesus—permanent and steadfast—on which he could always rely, providing him with spiritual stability. Following his teachings is like building on a rock—with God as the stable foundation.

Christ Jesus understood that spiritual reality could be recognized and demonstrated, knowing the kingdom of God is the only kingdom, the only true government—as these words attributed to the Lord’s Prayer in that sermon convey: “And lead us not into temptation, but deliver us from evil: For thine is the kingdom, and the power, and the glory, for ever” (Matthew 6:13). And Jesus proved God’s glory in so many ways, including healing the sick, raising the dead, feeding the multitudes, walking over water, as well as in his sublime resurrection and ascension. Governments that appear to be experiencing instability could certainly benefit from the Lord’s Prayer, grounded on the Rock of God, Truth, and bringing to light this source of steadfast, reliable power.

God’s kingdom is in place universally, and His government is intact, stable, and demonstrable.

In praying about the stability of nations, I have found those words from Jesus’ prayer to be especially helpful. I have prayerfully acknowledged the spiritual truth that since God doesn’t lead us into temptation, temptation has no power in God’s kingdom; and so man, as God’s spiritual offspring, can only reflect the goodness of God’s character, in which is no evil. God’s kingdom is in place universally, and His government is intact, stable, and demonstrable.

The devout Christian woman and spiritual thinker Mary Baker Eddy also taught that true stability has its origin in God. There is a piece of art hanging on the wall of my office that reminds me of her poem titled “Christ My Refuge,” which uses the illustration of a rock in connection with God, Truth, and strongly conveys this sense of stability. The art depicts a beach on the shore of an ocean coastline with waves beating against a large rock. Some of Mrs. Eddy’s words in the poem mentioned are:

Thus Truth engrounds me on the rock,
Upon Life’s shore,
’Gainst which the winds and waves can
shock,
Oh, nevermore!
(Poems, p. 12)

Her understanding of God as Truth was a rock for her as she navigated her challenging journey of faith, ultimately discovering Christian Science and founding the Church of Christ, Scientist. This rock gave her a spiritually permanent and trustworthy foundation from which to prove spiritual reality—the truth of man’s spiritual being as taught in Christian Science. She wrote, “Building on the rock of Christ’s teachings, we have a superstructure eternal in the heavens, omnipotent on earth, encompassing time and eternity” (Message to The Mother Church for 1901, p. 25).

While I was serving with the United States Navy, relying on God, Truth, was like a rock of stability for me and my wife during a time of uncertainty about one of my next duty stations. I was expecting word from the Navy detailer who oversaw assignments. But, as the days, weeks, and months went by with no word, we continued in prayer. I was prayerfully affirming the truth that God, one Mind, is in control—not many minds—and I knew that God actually governs my life. Therefore, God’s plan is in place, and so our place is established right now. We knew this was about God’s timing, not ours or the Navy’s.

I finally heard about two options, and we prayed for God’s guidance—to be led by His will. One day while out at sea, I was walking on the bow of the ship and heard an inspired message in thought about one of the options to the effect of: “Go to North Carolina—you will be greatly blessed.” That is what we did, and we were so blessed! We experienced that God, Truth, was a strong source of spiritual stability for us, bringing us the certainty of His control, guidance, and care, along with a sense of peace and calm in the face of anxiety and uncertainty.

Any propensity toward evil thoughts and actions has no true power to govern anyone because God governs His offspring.

I have prayerfully affirmed that man can only express God’s righteousness and goodness, as evidenced in sound moral judgment, including good ethical decision-making, respecting the rule of law, resisting bribery, and avoiding conflicts of interest. Any propensity toward evil, deceitful, dishonest thoughts and actions has no true power to govern anyone because God governs His offspring. It’s important to understand and affirm that leaders and officials in government are actually subordinate to God’s government—to “a divine influence ever present in human consciousness” (Mary Baker Eddy, Science and Health with Key to the Scriptures, p. xi). And since God is all-powerful, this divine influence is the only power that governs man, and so this can be manifested in the changing and reforming of human hearts for the betterment of nations.

Along these same lines, it’s also stated in Science and Health: “God could never impart an element of evil, and man possesses nothing which he has not derived from God” (p. 539). Christian Science makes so clear the unreality of evil and its inability to control man, created only good by God. And, since God’s goodness is ever present, evil, immoral thoughts and behavior have no true presence, place, nor power. Prayers that affirm this truth promote improvements in human governments.

In truth, goodness is never vulnerable to an evil influence because there is but one power, God. These words from Science and Health are a strong basis for our prayers in this direction: “Be firm in your understanding that the divine Mind governs, and that in Science man reflects God’s government” (p. 393). Since God, good, the one Mind, is all-powerful and harmoniously governs the spiritual universe, man can only reflect Mind’s harmonious government, which can be manifest in nations through the improved moral character and behavior of government leaders and officials.

There have been some encouraging signs of moral progress within nations during the past several years. Here are just a few: India’s Prime Minister has made government bidding more transparent. In Ukraine cases are finally being brought to court by new anti-corruption entities, “in hopes of breaking a culture of impunity.” And an agency in Indonesia, the Corruption Eradication Commission, has conducted prosecutions of top-level officials, and also promotes teaching integrity and honesty to children (see The Monitor’s View, The Christian Science Monitor, September 1, 2016).

Our recognition of the spiritual reality that God’s stable government of the universe is intact, right here, weakens views of unstable governments through the divine influence of God, Truth. As we yield in thought to God’s stable government, we can contribute to, and expect to see, the healing power of God evidenced at least to some degree in increased stability in nations around the world. Truly, God is a Rock—a permanent source of stability for individuals and nations. 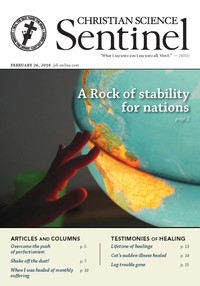