These were times when what I’ve gained from my study of Christian Science was very helpful. One of the things I’ve learned is that Mind is a synonym for God. So since there is only one God, then there is only one Mind. This Mind includes every right idea and an infinite variety of ideas. But because all those ideas come from one divine source, God, they are in harmony, not in conflict. Likewise, because Mind is also Principle, those ideas are ordered. What appears to be a lot of ideas in chaos, coming from many minds, is an inaccurate view of God’s universe, where there is actually a wholeness, oneness, and rhythm to all of creation.

Because all spiritual ideas come from one divine source, God, they are in harmony, not in conflict.

I had many opportunities to prove this, because my major required many, many group projects. And these projects would often involve students from all over the world. In one group we might have several European countries represented, as well as students from South America and the Middle East—all of whom have very different ways of looking at the world. But as I held to the fact of one Mind, it was easier to see how this wonderful variety of ideas actually pointed toward something whole. While some might say that we found a way to make our differing perspectives work together, to me the spiritual lesson was that the wholeness of the idea we were working for was already intact. Together, we didn’t make it coalesce; we discovered it.

I also found that knowing there’s only one Mind helped me see my fellow students differently. I began to realize that it’s not just ideas that have their source in Mind, but all identities, as well. I liked thinking about this fact in relation to sunbeams, as my Christian Science Sunday School teacher had taught me. Every sunbeam has its own individuality and “beams” in its own direction, but they all have the same essential qualities because they come from the same source. In a similar way, I could see that we, too, as spiritual expressions of the one Mind, are the outcome of one source.

This changed the way I was looking at my peers. Before I had this deeper understanding of spiritual individuality, I often came into situations with a certain expectation of how a person was going to think or behave. I can see now how this was biased and that it also wasn’t spiritually based reasoning.

Knowing the God-based individuality of all of us helped me begin to rise above conforming my thoughts about others to my own expectations or assuming certain negative motives. I found I was more open to what my peers brought to our projects, because my view of them wasn’t rooted in a material sense of personality, culture, or nationality, but in this purer sense of each of us as the expression of God’s infinite nature. When I could get to that place in prayer of understanding God as the center and source of everything, I could let go of the belief that any of the ideas we were “generating” came from a group of people with many differing opinions. Instead, I could expect to see the harmonious and free flow of what God was revealing. This better understanding both of my peers’ spiritual identity and the divine source of the ideas that were motivating us led to projects that went smoothly and joyfully while we worked on them and brought them to conclusion.

For me, getting a more spiritually based view of diversity has ultimately been about getting a clearer sense of divine Love. The Bible promises, “There is no fear in love; but perfect love casteth out fear” (I John 4:18). So any sense of fear we feel, based on others’ differences or our own, disappears as we begin to understand that all that really exists is Love and Love’s creation. I have found that as we let Love inform our perceptions of others, we can’t help but love and appreciate all that Love has created. 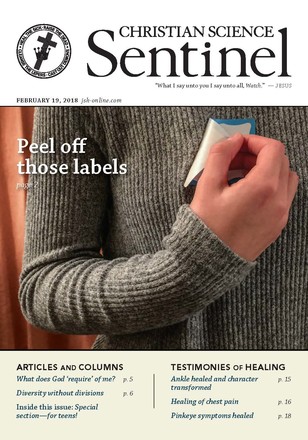 Peel off those labels

Teamwork and the divine Ego

What does God ‘require’ of me?

Talk to my friends about Christian Science? Me?

As a trusting bird

The value of self-knowledge

The way I really am