The following article by Frederick Dixon is sound and scientific; it cannot be permeated with an insinuation unscriptural or an argument illogical. It is as firm as the foundation of Truth, and it is immortal.

I thank Mr. Dixon for his clear-cut scientific sentences, simple sound logic, and above all for his honest declarations in the face of his disputants. His calm, sound, and demonstrable utterances are undeniable by honest men or women of common sense, and are practically accepted by the logician, by the religious, literary, and historic authors and editors of this period.

The sermon on "Christianity and Christian Science," preached by Canon Masterman, and reported in your issue of the 12th inst., manifests, I think, a desire to be fair, and so renders it easier, if only in the fragmentary way possible in a letter, to attempt to correct the misconceptions into which he has been betrayed.

The preacher, at the very outset, if he had only known it, fell into a fundamental error, for he explained that Christian Science was reminiscent of the speculations of the Gnostic teachers of the second century. Now Gnosticism was the outcome of that contact of the Jew and the Greek, in the Asian church, which led to an attempt to blend Hebrew and pagan ideals in a philosophy that would reconcile the rigid dogmatism of the one with the culture of the other. It so happens that the orthodox churches of today are in this very dilemma, for they have accepted literally the materialism of the Pentateuch, and have been compelled, in order to reconcile it with the teaching of the New Testament, to create a theology less logical than that of Gnosticism. The two cardinal difficulties which led to Gnosticism were: First, how to reconcile the creation of the material universe by an absolutely good God with the existence of evil; and, second, how the human spirit came to be incarcerated in matter, and how it was to be released. Now Christian Science denies the very premises of the issues at stake. It denies that the physical universe ever was God-created, or that Spirit ever was incarcerated in matter, and so finds no dilemma to escape from. The orthodox churches, however, accept both the premises, and it was the effort to escape from their inevitable conclusions rather than the teaching Christian Science, that provided the raison d'etre of the Canon's sermon. How real the difficulties are, it is easy enough to show.

The book of Genesis distinctly declares that God saw all that He had created, "and, behold, it was very good." Therefore it is logically obvious, if evil is real, either that there was another creator besides God, or else God created evil and termed it good. Again, if Spirit is imprisoned in matter, how did this come about, for Jesus said quite unmistakably, "The flesh profiteth nothing;" while Paul wrote to the Romans, "They that are in the flesh cannot please God." Is it conceivable that the creation of an absolutely good and wise God contained something which was of no profit, but in which spiritual life was imprisoned?

Christian Science is in no such quandary. It explains—and here all the great scholars of the churches are at one with it—that the Old Testament is not a verbal revelation to be taken in an absolutely literal way (if it was, it would be faced at the very outset by verbal contradictions), but that it is a collection of allegory, apocalypse, poetry, and history. And it goes on to explain—and here it parts company with so-called orthodoxy altogether—that these biblia are merely the attempts of different men, at different epochs, gifted with a varying spiritual intuition, to record, as accurately as human language would permit, the evolution of the human consciousness from a belief in the reality of sin, disease, and death to an understanding of the truth which Jesus declared would make men free, and which Mrs. Eddy has stated, on page 468 of Science and Health, in the phrase, "therefore man is not material; he is spiritual."

When, therefore, the preacher described Christian Science as a mixture of "oriental philosophy, Stoic theories, and Christian teaching," he was not only indulging in the wildest of generalities, but was utterly at sea. You might apply the first term to the Bible on the grounds that it is frequently philosophical, and is indisputably eastern. If, however, the illustration is meant to imply that Christian Science has any connection with the philosophies of what has come to be known as "the far East," the suggestion is absurd. Those philosophies are, without exception, based on the admission of the power of the human mind, which is distinctly "a house divided against a house," and which is, in consequence, as completely disowned in Christian Science as in the teaching of the New Testament.

Now the preacher claimed matter as "the garment of God," though, as has been already pointed out, the Bible expressly declares "they that are in the flesh"—the garment of God—"cannot please God," and he goes on, as he is bound to do, from this to "thank God for the mortal mind." But the mortal mind is the mind of mortality, and "as by one man sin entered the world, and death by sin," he arrives quite unintentionally, but quite unerringly, at thanking God for sin. It is, of course, this mortal mind which, claiming to work by some process of mental suggestion, constitutes the force through which oriental magic in turn claims to work. It was the means by which the Jews attempted to taint the stream of Jesus' healing, and which they termed casting out devils through Beelzebub. Jesus' answer repudiated mortal mind forever as a factor in Christian healing. "If I," he said, "with the finger of God cast out devils, no doubt the kingdom of God is come upon you." The kingdom of God never came upon any man through the suggestion of mortal mind. It comes through the Mind of Christ, and that Mind is attained not through the study of philosophy, but by walking in the footsteps of Christ, and so learning the truth which makes men free; namely, the fact that the creation of an absolutely good God is spiritual and not material, and that, however strange it may seem to the human senses, evil is not power and is not real, but is what Jesus declared it, when, personifying it after the manner of the East, he called it a liar. The only power a liar can ever even seem to exert is the temporary sense of power he may seem to posses while those who hear him are sufficiently ignorant of the truth which frees to be held in bondage by the lies he utters.

The preacher was, perhaps, even more unfortunate in his attempt to associate Christian Science with Stoicism. The great Stoic maxim is, "Live according to nature," and by nature the Stoic implied the physical universe and the prompting of mortal mind, the reality of both of which are denied in Christian Science. There were, naturally, in the Stoic philosophy points where it approached Christianity, and so we find Paul quoting a Stoic writer on a famous occasion. Stoicism, however, lost itself in the frankest pantheism, and when an orthodox churchman has declared that God is infinite, and that matter is real, he has reduced his teaching to the same pantheistic level as the Stoic.

Popularly, however, the Stoic is known as the parent of "the grin and bear it" gospel, and without any wish to be offensive to the preacher, this was precisely what his own theory of suffering developed into, a fact which he recognizes in the sentence, "For the unavoidable suffering of the world we throw the responsibility on God." Christian Science denies the accuracy of that statement from alpha to omega. No suffering, it declares, is unavoidable or anything approaching unavoidable. It is unavoidable just as we fail in learning the truth which makes men free; but the knowledge necessary to destroy it does not amount to what in the epistles is described as the epignosis tou theou, the full knowledge of God, but to the knowledge acquired through the faith which Jesus likened to a grain of mustard seed. Suffering, of course, has its value. It is sometimes the only thing which will rouse a man from the dream of sensuality, but the moment he wakes out of that dream and begins to learn something of Truth he begins to acquire the power to demonstrate Truth, and so to fulfil the command of Jesus, "He that believeth on me, the works that I do shall he do also." Still, in order to gain anything of that knowledge, he must gain something of the Mind of Christ, and that is why Mrs. Eddy has written, on page 267 of Science and Health, "Even in this world, therefore, 'let thy garments be always white.'" 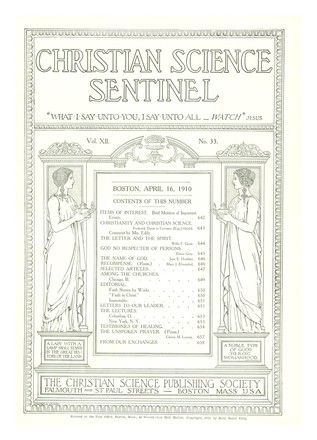 By Frederick Dixon with contributions from Mary Baker Eddy | April 1910

THE LETTER AND THE SPIRIT

GOD NO RESPECTER OF PERSONS

THE NAME OF GOD

I would suggest to this critic, before he again "lifts the...

Christian Science is nothing more nor less than the...

If Christian Science was any such nonsense as our critic...

A despatch states that a Japanese professor claims that...

Our clerical critic errs when he classes Christian Science...

Spiritual healing is effected by gaining a knowledge of...

The results of Jesus' ministry proved that he knew...

Christian Scientists do not claim that Mrs. Eddy has...

Our critic rightly argues that Jesus did not come to earth...

with contributions from Anon | April 1910